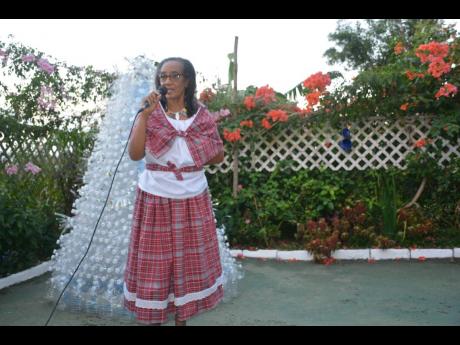 Photo by Janet Silvera
Tamika Williams, creator of the solar-powered plastic bottle Christmas tree, addresses the ceremony at its unveiling and official lighting ceremony in Camrose, St James, on Wednesday.

The community of Camrose in St James has continued to impress with innovative holiday showpieces, unveiling a solar-powered Christmas tree made with 1,250 recycled plastic bottles on Wednesday.

The ingenuity had close to 50 children and several adults in the community in awe as the Tamika Williams creation signalled the shifting of gears in the Yuletide tradition.

The community received national attention seven years ago when it introduced the ackee Christmas tree to the world.

Last year, they used bromeliads – living flowers; however, owing to COVID, there was no fanfare.

On Wednesday, Williams, who operates the AhhhRasNatango Art Gallery and Gardens, with husband Ian and son Ayale, explained how she collected the plastic bottles over the last year and decided to put them to good use.

“I usually use the bottles to make flower pots by just cutting off the tops, but we are an environmental property, so we reuse the water bottles to show that we can protect what we have,” Williams told The Gleaner.

She said the only cost incurred was the solar string light, as she reused the frame that was used in 2021 to hold the bromeliad tree. Fishing line was used to string the bottles together and attach them to the frame with the solar lights placed on the inside of the bottles.

Williams said she was inspired to carry on the tradition of the tree, after hearing a young man in the community admitting that it was his first time seeing a Christmas tree when they used the ackee plant in the community square.

“One year, I decided not to do it and they (the young men) just came up here took things and did it themselves in the community square. For us in a rural community, we try to do the right thing. So we tried to show them what they can [make] do with just what we have. The symbol for me with this tree is that we took something that we would have thrown away and made it into something that brings joy,” Williams explained.

The artist, who creates interesting and beautiful artwork out of eggshells, said the philosophy is mending broken pieces.

“Using eggshells is my contribution to art, but being an environmentally aware person, we no longer throw these bottles away,” she stated.

Reminiscing on the first Christmas tree that the community did, Williams said they learned a lot from their mistakes because there was an electrical outage that delayed the lighting.

“Ensuring we never have that problem again, our tree does not require JPS to light it,” she said, referring to the Jamaica Public Service Company.

As the evening became darker, the lights from the solar system lit up the area, and shouts of joy could be heard.

“The way we behave with each other, what we can do, even though we are a small community, the relationship we build are critical to our survival,” Williams told the gathering, which included police officers, members of the Combined Citizens’ Association and several residents.

Williams, who chose December 7 as the day of unveiling as it was her 43rd wedding anniversary to Ian Williams, said that in addition, she saw the initiative as a way to help the children who had been traumatized by the pandemic.

Camrose was named an International City of Peace, owing to the role it plays mentoring young men in the community.