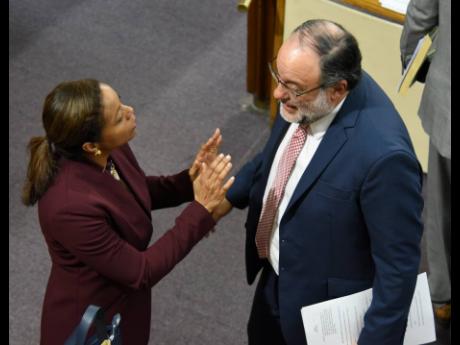 Ian Allen/Photographer
Marlene Malahoo Forte, minister of legal and constitutional affairs, engages in discussion with Opposition Leader Mark Golding after the adjournment of the sitting of the House of Representatives on Tuesday.

The Government’s proposal to increase the mandatory minimum sentence for non-capital murder from 15 to 45 years will not face any objection from the Opposition.

Mark Golding, the leader of the Opposition, said the consensus would make a statement to society about the heinous crime.

While indicating that his philosophy was to leave sentencing to judges, Golding asked Justice Minister Delroy Chuck on Tuesday whether he was also inclined to impose mandatory sentences for gang-related crimes and lottery scamming which give rise to many murders.

Chuck, in a statement to Parliament moments earlier, said that for sentences of life imprisonment for non-capital murder, it is proposed that convicts not be eligible for parole before serving 40 years, up from 15.

The minister said that he would shortly take a bill to Parliament that reflects the Government’s position on the proposed increased penalties.

Chuck told parliamentary colleagues that with the recent passage of the Firearms (Prohibition, Restriction and Regulation) Act, 2022, which stipulates a mandatory minimum sentence with a range of 15 years, there was need to adjust the minimum penalty for murder under the Offences Against the Person Act.

“The reputational damage resulting from abnormally high rates of intentional homicides and, by extension, the impact on the country’s GDP, the debilitating strain placed on the Jamaican populace from the daily loss of life by violent means, necessitated that the penalties imposed be especially punitive,” the justice minister said.

Chuck noted that Jamaica has the highest homicide rate – 43.85 per cent per 100,000 people – among 22 Latin American and Caribbean countries and has been characterised as the second most dangerous country in the world.

“A clear and unmistakable message must be sent to potential killers that their wanton and heartless act will be met with disgust, repugnance, and a lengthy period of incarceration,” he said.

Commenting on the proposed changes, Golding said that he would not object to the idea of raising the minimum sentence for murder and also the period for parole “because we need to make a statement to the society – if you commit murder you are facing the stiffest possible penalty”.

However, Golding said when he was minister of justice, he never brought legislation to Parliament to impose mandatory minimum sentences because he opposes the notion on principle.

“I don’t think that it is consistent with the role of the judge to be able to impose the sentence that fits the crime. We are in a sense arrogating to Parliament that by imposing in the law minimum amounts by which the judge can’t go below,” said Golding, adding that such sentences might sometimes be unjust.

He suggested that a sunset clause be inserted in the proposed law to weigh how it works over the next two to three years.

“We are living in extreme times and it calls for firm measures. As long as the measures are not unconstitutional, I am not going to object to the measures,” the opposition leader said.

Responding to Golding’s remarks, the justice minister said that while the judiciary frowned on fixed penalties, it rarely disapproved of mandatory minimum sentences.

“If a judge thinks that the sentence is unduly harsh, he can send it to the Court of Appeal,” Chuck said.

Late last year, Director of Public Prosecutions Paula Llewellyn, KC, recommended to the justice ministry 30- to 40-year imprisonment as the starting point for a life sentence for all murder convictions before eligibility for parole.

Llewellyn’s suggestion came after the Court of Appeal ruled to reduce convicted killer Quacie Hart’s prison sentence before eligibility for parole from 31 years to 20 years.

Hart is serving a life sentence for the stabbing death of 14-year-old Jamaica College student Nicholas Francis during an altercation on a bus on October 26, 2016.