A dedicated educator making a difference. 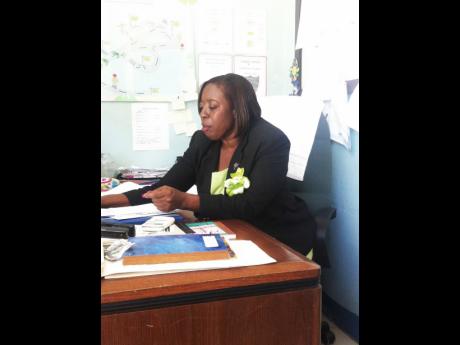 Ruddy Mathison
Ann Geddes-Nelson, principal of the Saint Faiths Primary, said she would not do anything else.

There are many challenges in the teaching profession, hence, it requires a level of dedication and professionalism on those involved to foster longevity in this noble calling.

Ann Geddes-Nelson, principal of the Saint Faiths Primary, in the deep rural community of Saint Faiths in eastern St Catherine, has been an educator for about a quarter century. Despite the many challenges facing the education system she said she would not do anything else.

Geddes-Nelson told Rural Xpress that she had many opportunities to pursue other careers, but her love for teaching did not allow her to venture outside the field.

"If you love education the way I do; if you love to see children grow and become responsible professionals like I do, then you would feel an enormous sense of satisfaction being an educator," she gleefully added that if she were to be born again, she would do the same thing over and over.

Geddes-Nelson graduated from Tarrant Secondary School then went on to Mico Teachers' College, where she received a diploma in teacher education. She later completed a bachelors degree in education and a masters in primary education.

She started as a pretrained teacher at Naggo Head Primary, continued full-time as a classroom teacher, advanced to the position of senior teacher. She was vice-principal and acting principal during her time at the institution. She accepted the post of principal at Saint Faith Primary six years ago.

"I was excited ... even though I was being paid less, and had to contend with the tiresome commute from Portmore, where I reside to Bog walk and then to Saint Faiths, I was undaunted," Geddes-Nelson acknowledged.

According to her, the thought of being principal of a rural school where parents would take interest in the education of their children appealed to her in a big way. She revealed that her greatest disappointment came when she found out that she was wrong.

"Despite my disappointment, I continued to work imploring students (to understand) that the sky is the limit, while encouraging parents at meetings to ensure that they help their children, because the measure of progress is when each generation is better than the one before," said Geddes Nelson.

She disclosed that the results of her hard work at Saint Faiths is bearing fruit. The school is now seeing a 28 per cent increase in the grade four literacy test and growth of 7.5 per cent in GSAT averages in six years.

Geddes-Nelson who is married was able to raise three children, Orene, an attorney-at-law, Kayann, a zoologist and Vachenique now a upper sixth-form student at Campion, while dividing her time between work and study.

Yvette Dennis, education officer at the Ministry of Education, who has seen Geddes-Nelson's performance over the years, attested to her dedication, telling Rural Xpress that she is an admirable person who works hard and continues to display sound leadership qualities.