Obama's response to US policies and relationships 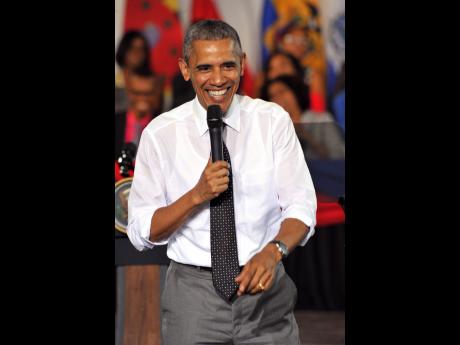 WHA GWAAN Jamaica? That's how President Barack Obama broke the ice with young leaders of the Caribbean and Latin America at a town hall meeting held at the University of West Indies last Thursday.

Being the first president of the United States of America to visit the island in more than 30 years, he liked the "vibe" here and felt right at home. He highlighted that our generation of young people will shape the future of our countries, region, and the planet.

Very keen on Jamaican sports, music, and literature, he encouraged us with a quote from Bob Marley, whose home he had

visited the night before: "The people who are trying to make this world worse are not taking a day off, so why should I?" Instilling that "we must strive on to gain the height, although it may not be in sight," an excerpt from Jamaican-born poet Claude McKay.

Obama announced the Young Leaders of the Americas initiative before concluding and opening the floor for questions. Followed by a meet-and-greet session, he was delighted to strike a pose with the great Usain Bolt - the fastest man in the world.

Now that the US policy about Cuba has changed, how do you think CARICOM should approach its relationship with Cuba?

"CARICOM can make its own decisions," Obama said. Cuba participated in the Summit of the Americas, held in Panama City, Panama on the weekend. In his view, the re-engagement with Cuba will eliminate some of the mistakes of the past, but will take some time for the full benefits to materialise. Issues regarding basic human rights are freedom of speech are top priority.

If you could go back in time to 2008 before you won the election and give yourself some advice, what would it be?

"When I came in office, the US was going through the worst financial crisis since the 1930s, so I had to make some unpopular decisions. The US was able to escape the crisis and bounce back quicker than normal, although it was costly politically." He wished he could have warned the American people that it would take more effort to dig themselves out of a big hole. He would have advised himself to spend more time describing the policy so that people could understand the economics better.

How do you handle stress?

He has a good temperament which can be attributed to him growing up on an island. He tries not to get too high or excited when things are going well, so that he does not get to low or disappointed when things go badly.

"When you have lived long enough, you grow to understand that change is a process and everything shall pass. Always keep your eyes on the prize about where you want to go, never to be discouraged or overly emphatic during the journey."

Give two bits of advice to small island developing states that rely mainly on tourism and FDI.

"There are three main factors that deter people from investing in a country; conflict, corruption and lack of skills or infrastructure. Countries that have been able to create a highly educated workforce and rules of law that are highly transparent and not corrupt have been able to become successful."

How does the US view China's influence in its own backyard? What economic plans does the US have to compete against China in the Caribbean and Latin America?

Obama said he appreciates what China has done. He welcomes FDI inflows from China. He noted that the world should be more fearful of a dwindling China than an expanding China. What we should be concerned about is where China uses force to achieve its objectives. If China is making investments that are building infrastructure or increasing education, what strings are attached? If investments are made to build a road to extract raw materials and Chinese workers are imported to build these roads or we don't know the deal with Government that led to China being given the contract to build this infrastructure, then we should be concerned. The Government should be transparent and accountable on how the country's money is being spent. There should be a sense of how this will benefit us in the long run.

What is US policy regarding the legalisation and decriminalisation of marijuana in Jamaica in light of the economic challenges that Jamaica faces with IMF, etc.

He separated the issues surrounding legalisation versus decriminalisation.

"The decriminalisation policy is geared towards making young people who use marijuana employable and non-criminals. It has been very costly to incarcerate people for marijuana use, and the Government can save time and money through decriminalisation. As it relates to legalisation; Colorado and Washington states have embarked on an experiment. On paper legalisation looks like a good policy, but in reality it will not automatically reduce crime and increase economic activity. Legalisation comes with other issues that are beyond the economics."

Are debt write-offs for Jamaica being considered as a viable alternative to improve the livelihood of the people?

"The best way for a country to reduce debt is to grow fast and generate income. This requires development policy, which includes sacrifice. The decision remains if the Government is spending money; we have to ascertain if these will be spent on aspects that will improve the economic prosperity of the country over the long term."