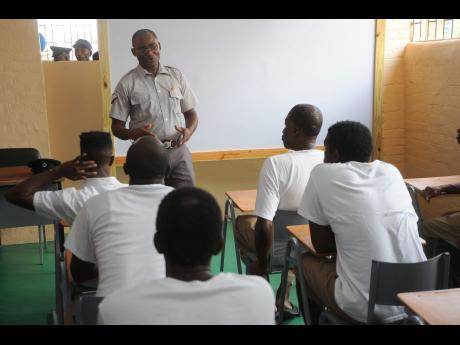 Jamaica's prison population declined by almost six per cent between 2012 and 2014 and Minister of National Security Peter Bunting is linking this to the removal of juveniles from adult prisons and reforms to the parole process.

Figures received by The Sunday Gleaner, through the Access to Information Act, show that in the two years under the review more than 330 inmates left the adult correctional facilities. As at December 31, 2014, the numbers of persons held in prisons stood at 3,195, a reduction from the 3,829 listed in 2013. Data for the year 2012 reported 4,026 inmates behind adult prison walls.

"The biggest reduction has come from the removal of the juveniles from our correctional institutions, I know that about 60 per cent of the female juveniles and about 30 percent of the male juveniles, who were in the country's remand centres, have been removed so far.

"In addition to that, we have appointed a new parole board and we gave them instructions to expedite the parole process so that those who are qualified could utilise that option," said Bunting.

The issue of children being incarcerated in adult correctional institutions is one that has dogged the Jamaica Government for years. In 2013, Minister of Youth and Culture Lisa Hanna admitted in her Sectoral Debate that the country was in breach of the United National Convention for the Rights of the Child and the United Nation's standard minimum rules for the administration of juvenile justice.

At that time, Hanna announced that 148 children had been removed from the island's remand centres and committed that cooperation between the Child Development Agency (CDA) and the police would bring the country to compliance with international regulations by 2014.

Bunting, while acknowledging that more still needed to be done in this regard, was delighted that the cooperation between the security forces and the youth ministry had yielded positive results.

"We have utilised more divergent policies and have tried to find alternate accommodation for these children, whether it's in the places of safety, or with a family member, or another responsible adult who can guarantee safe custody to the child. And so, with the assistance of the CDA, we have made use of those options and have tried to avoid correctional orders whenever possible," explained Bunting.

This was supported by the Economic and Social Survey Jamaica for 2014, which shows that of the 838 new admissions to the Tower Street, St Catherine and Fort Augusta adult correctional facilities, none of them were below the age of 17 years.

Males between the ages of 17 and 35 accounted for the majority of Jamaicans remanded in the island's correctional facilities in 2014, with 1,097 of the 1,733 persons incarcerated during that year. Less than nine per cent of those new prisoners were female.

Meanwhile, 21.8 per cent of those sent to prison in 2014 were charged for the offence larceny/larceny of motor vehicle, while 13. 4 per cent were remanded for breaches of the Dangerous Drugs Act and 9.5 per cent for wounding.

Children's advocate Diahann Gordon-Harrison was heartened by the news of the removal of the juveniles from the island's prisons.

"Of course, that is news that we welcome, because we believe that when children are institutionalised it really does not augur well for the system or for the children who are involved, because deprivation of liberty really must be the very last resort," said Gordon-Harrison.

"It is something that we have seen happening, particularly in relation to the girls I can speak of, because that number has consistently gone down. We still, however, have to deal with those that are still in those facilities, so we look forward to even greater reductions."