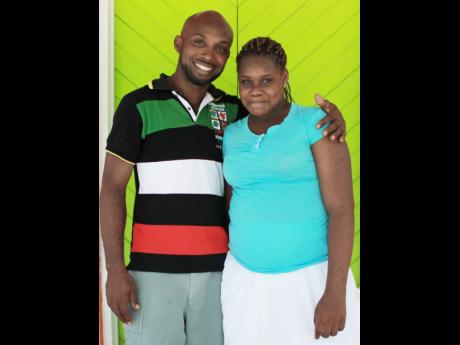 Orantes Moore
André Baker and his 12-year-old daughter Moya-Kay, who suffers from a learning disability, at home in Tryall, St Mary.

Parenting a child with a disability is often a challenging, tiresome and thankless task, but one that St Mary-based businessman AndrÈ Baker takes in his stride.

Baker's world changed just over five years ago when his daughter, Moya-Kay, was diagnosed with attention deficit hyperactivity disorder following an incident when she was assaulted by another child at school.

Although Baker, 34, had previously considered that something may be wrong with Moya-Kay, initially, he was reluctant to accept the medical experts' findings.

He told Family and Religion: "When she was a baby, things were pretty normal. I have a little teaching experience and had begun coaching her on stuff like the alphabet, so when Moya-Kay started basic school at three years old, she was doing well.

"However, during her second year, an incident occurred where she was bullied and bitten by a little boy, and that made her scared to go back. The learning disability is really coming from that experience, which she was trying to block out.

"She stopped working at school and wouldn't do anything at home, so I moved her to another school where the teacher really nurtured her. [Moya-Kay] started working again and was coming along, but then the same boy moved to the school and was placed in her class.

"I got him moved to another class, and my daughter was improving slowly until she was placed with a new teacher. She continued to progress and moved into grade one in Port Maria Primary School. But guess who was in her class?

"[Moya-Kay] locked off again and I had to be at the school almost every day because she was throwing tantrums and wouldn't do any work. We hoped it was just a phase but were in denial and unaware there was a serious problem."

Baker, who lives in the parish's Tryall district, arranged for his daughter to be assessed by a number of psychologists and psychiatrists who recommended that she be transferred to the Edgehill School of Special Education in Port Maria.

Although it took some time to accept that his child had a disability, Baker advises any parents that finds themselves in a similar position to be brave, loving and patient.

He explained: "At first, we were apprehensive about sending our child to a school for children with disabilities because of the stigmas attached to the school and being a parent of a disabled child.

"The idea took some getting used to, but I'm not going to turn around and start ridiculing my child and I'm not going to play the blame game and say: 'It's her mother or somebody who caused this to happen.'

"We are all humans with weaknesses, and sometimes you feel like you just can't handle the situation, but you have to. A lot of parents will find it hard to cope, but try to hang in there."

Looking ahead, Baker hopes to provide Moya-Kay, 12, with better medical care. He believes more resources should be afforded to agencies that assist children with disabilities.

He said: "I would like my daughter to have some intensive, one-on-one psychiatric sessions, but these things are expensive and I'm unable to finance that right now.

"I'd also love the Government to recognise organisations such as the Jamaica Association on Intellectual Disabilities and the support they provide because there are a lot of people with disabilities but very few agencies catering for them."