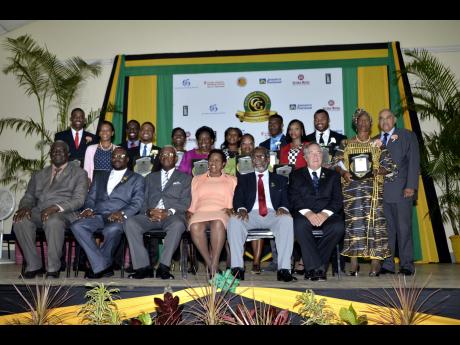 Christopher Thomas
Retired Major Effiom Whyte (left, front row), chairman of the 2015 Governor General’s Achievement Awards for the County of Cornwall, shares a group photograph with the 13 awardees selected for this year’s presentation ceremony (back row), and the five custodes rotulorum of Cornwall, following the annual ceremony which was held at the Sean Lavery Faith Hall in Westmoreland on Thursday. The five custodes rotulorum are (seated, from second left): Reverend Hartley Perrin, custos of Westmoreland; Ewen Corrodus, custos of St James; Beryl Rochester, custos of St Elizabeth; Dr David Stair, custos of Hanover; and Paul Muschette, custos of Trelawny.

Thirteen residents of Jamaica's western county of Cornwall were honoured last Thursday, when they were presented with the 2015 Governor General's Achievement Awards for Excellence in a ceremony held at the Sean Lavery Faith Hall in Westmoreland.

The awardees were recognised for their contributions to community volunteerism and nation-building, in keeping with this year's theme, 'Values through Volunteerism: Impacting Communities one Community at a Time.'

Those who were awarded were:

During his keynote address at the ceremony, Governor General Sir Patrick Allen lauded the awardees for embodying the spirit of volunteerism through their respective community projects.

"We thank you because, through your various community projects, you have become beacons of hope, the hope necessary to guide our youth into positively viable action," said Sir Patrick. "The value of volunteering is much deeper, much more fulfilling and much more important than money could ever measure."

The governor general continued: "Whatever volunteers achieve at the community level, it impacts the parish, the nation, the region, and invariably the world. I want you to know, awardees, that your spirit of volunteerism has ignited the flame that is burning hope in the heart of many persons in their respective locales. You display attributes which qualify you to become 'I believe' ambassadors, to help strengthen and sustain our efforts to develop family values, education and youth empowerment."

In responding on behalf of the awardees, Westmoreland award recipient Kamille Dwyer-Thomas noted that the work which they had begun would not end with with the awards.

"Oftentimes, we question our ability to help others, and in many cases we find excuses as to why we cannot give of self. For many of us in this room, we have taken the initial steps towards bettering mankind, and we understand that our work continues after today," said Dwyer-Thomas. "Life requires us to make choices, and our choices and purpose should be guided by something bigger than ourselves."