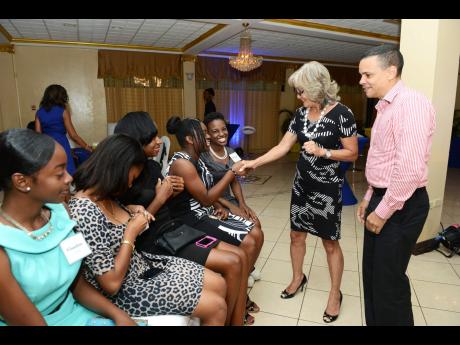 Contributed
Thalia Lyn (right, standing), chair of the NCB Foundation, jokes with a few of the parish champions. 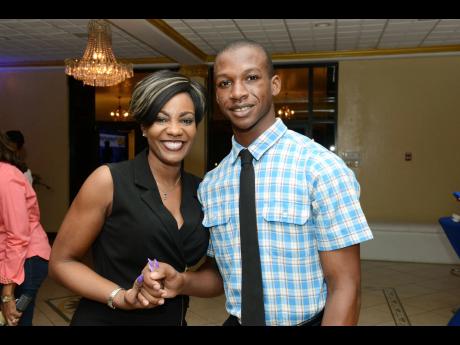 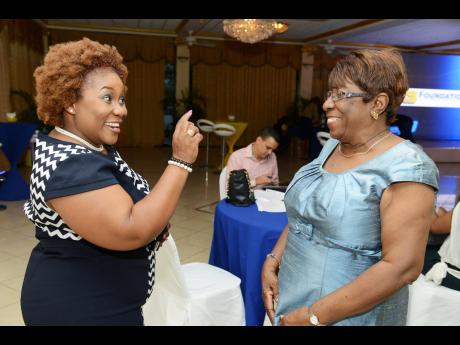 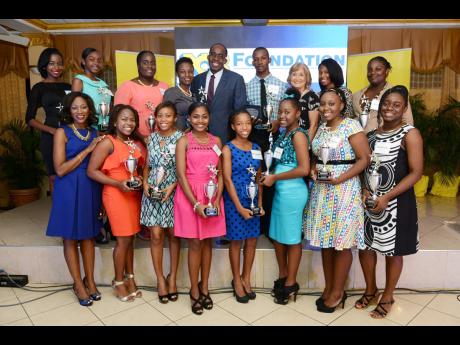 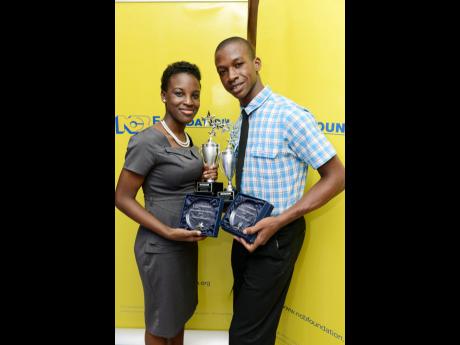 Contributed
Patrenia Williams and Kevon Stewart were all smiles after winning the coveted national title.
1
2
3
4
5

Patrenia Williams of St Elizabeth and Kevon Stewart of Kingston are the National Commercial Bank (NCB) Foundation National Scholars for 2015/2016.

The pair were chosen from 14 parish scholarship winners, who were announced last Thursday. The parish scholars were then interviewed by adjudicators, with four reaching the 'final'. From that four, Williams and Stewart (who was the only male of the parish scholars), were declared winners. The assessments and interviews took place at the lecture room of the Caribbean Institute of Media and Communication at the University of the West Indies, Mona campus. The national scholars announcement took place at the nearby Mona Visitors' Lodge. Both scholars were blown away by the announcement.

"I am really happy, I'm really grateful. Today has been a really good day," said Williams. "I think it was competitive but I did my best, and I guess hard work does pay off. Thank you to NCB Foundation for this opportunity." The soft-spoken Stewart said words couldn't express how he was feeling.

"I am so grateful for this opportunity that NCB has given us," he said. "These past two days have been great, meeting all these wonderful people." The NCB Foundation Scholarship and Grant Programme is in its eighth year and has awarded in excess of J$240 million to more than 2,000 recipients since its inception. The programme assists students at the primary, secondary and tertiary levels, and the main aspect is to award 14 parish champions with scholarships valued at $250,000 per year, and two national scholars with scholarships valued at $500,000 each per year.

This year, more than 7,900 applications were received for the suite of scholarships and grants with the hope of securing one of the more than 380 spaces. Foundation CEO Nadeen Matthews said successful people shared five traits; they aim high, work tirelessly, seek help, persevere and give back. She noted she had seen all these traits in the scholarship recipients. Member of the judging panel and NCB Foundation Deputy Chairman Andrew Pairman said the judges were in awe of the scholarship winners during the interviews.

""You drove us crazy, and crazy in a good way, because we were mesmerised, we were taken aback," he said. "We were, at times, just finding it very difficult as to how to compare one potential scholarship awardee to another. You did so well." He said it was a challenge just to narrow the group down to four.

"It has given me a new zeal on life, a new reason to continue to work hard at NCB Foundation," he said. "I want to tell you...we are a family and we will always be here for you. We're very proud of you," he said.

NCB Group Managing Director Patrick Hylton, who knows a thing or two about rising to the top from humble beginnings, encouraged the scholars to "be different" in terms of they behave, think, act and how people perceive them.

"If you want to be like the crowd and be like everybody else, that's the result that you'll get," he said. "So, sometimes it's a good thing when people think you're a little weird, or they think that you're doing things to an extreme," Hylton told the winners.

The NCB Foundation recently celebrated donating J$1 billion across its areas of remit: education, community development and sports, and youth entrepreneurship and development.