Batting for the Top 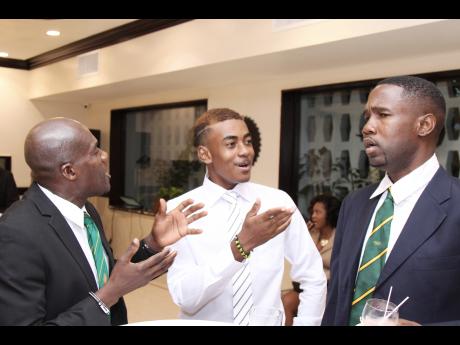 Ricardo McGeachy is among the ambitious young charges to have graduated from the Chris Gayle Foundation. Armed with 19 years of youthful energy and a cricket bat, McGeachy hopes to qualify for Jamaica's national cricket team. A graduate of Excelsior High School, McGeachy decided to follow his passion.

"I introduced myself to

cricket," was his response when asked how he fell in love with the game.

McGeachy, whose uncle is the distinguished cricketer Chris Gayle, is looking to follow in the footsteps of his famous uncle. Most young men aspiring to be cricketers view the West Indian star as a force to be reckoned with, and while McGeachy might definitely be privileged to be so close to the phenomenon, he told The Gleaner that his uncle is not as supportive of him as many

However, the foundation focuses on the ways in which the sport of cricket might be used to develop the physical, mental and psychological faculties of young inner-city youth. The initiative is the brainchild of Gayle, who continues to be an example of success and charity in Jamaica.

"My uncle does not help me," McGeachy said. In fact, when asked about the obstacles to his success, personal and professional, he confided that there are those who assumed he would reach the top of his field simply by merit of his popular relative, but the proud McGeachy considers this assessment to be unfair and insists that is not the case.

Aside from "introducing himself" to the sport, McGeachy has worked harder than many of his peers in order to establish himself as a 'self-made' man. An avid sportsman, McGeachy says he fiercely enjoys the competition and would not use his uncle's name as a crutch.

McGeachy was among the first batch of students who recently got the opportunity to discover their talent and develop themselves through the vehicle of competitive sport, exclusively cricket. It provides a comprehensive learning environment and encourages scholastic as well as sport education.

The students participated in lectures and classes, many of which are held at either the University of Technology or University of the West Indies. This way, students get comprehensive exposure to a high level of physical training and academic study. This helps them unearth their true talents.

McGeachy plays for the Lucas Cricket Club and is mentored by Wavel Hinds, who is president of the West Indies Players' Association. The future cricketer's next steps will see him studying accounts at the University of the West Indies.