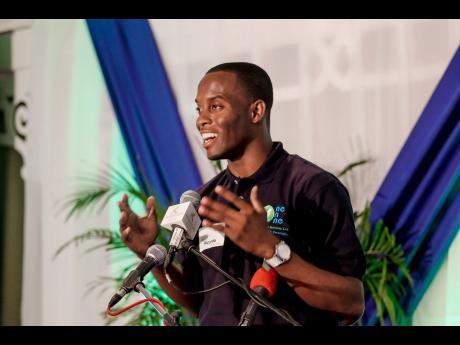 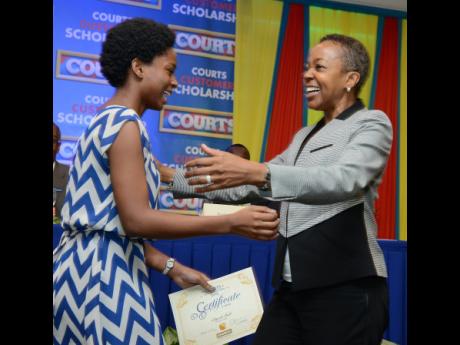 "Society invites us to pursue instant pleasures, fast bursts of joy and quick hits of feeling good," he said. "However, there comes a moment in every life, including yours, where the chance appears to leap from ordinary to legendary, from average to epic and from normal to iconic. This time is today." He reiterated Courts' support of youth by investing in education and challenged the recipients to seize the opportunity.

"It's untrue that top achievers are born with gifts that you do not have," he said. "And buying into that idea is a great way to avoid doing the work you need to do to enjoy the success you deserve to have." The Courts Customer Scholarship was launched in June 2011 and replaced the two former scholarship programmes - Junior Management Programme and Manufacturer's Apprenticeship Development Exercise. The programme provides financial assistance to needy customers, or their dependents, with their educational goals. Scholarship applications open in June and close in July annually. This year, the tertiary students will work with mentors who are senior managers of the Courts team.

Ricardo Allen, managing director and founder of One-on-One Educational Services Limited, told the scholarship recipients about his struggles as he came through the education system, even having to work to send himself to school.

"Privilege is such an awesome thing in life, we don't determine how we get into this world," he said. "You, however, have a say in what you do while you're here." Allen warned them that there were going to be times when their backs would be against the wall and so the only way to fight back, was to go forward.

"That level of thinking is imperative, I think, to go through life," he said. "Because what it does is to give you that frame of mind that 'look I have to get out'." Allen shared some of the obstacles he faced in trying to get an education, and noted many of his fellow students were much better off financially. But he expressed gratitude for the scholarships he received that helped him achieve his dream.

"This opportunity that you all have today, by you getting funding from a corporate entity such as Courts, is levelling the playing field," he said, reminding them there was one semester he got a less than 30 per cent average. "If you today are getting more than 28 per cent average...you have absolutely no excuse. None whatsoever."

Former scholarship recipient Romain Thompson, who is from humble beginnings in Clarendon, and is now working at PriceWaterhouseCoopers, encouraged the scholarship winners to have a long-term vision.

"The most important thing is to always, every day, improve yourself," he said. "Set that bar higher every single time."