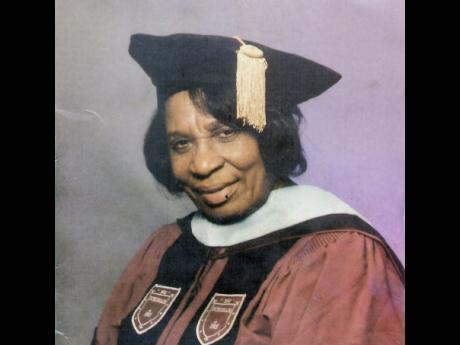 Her hard work and dedication caught the eyes of the powers that be, and they transferred her to Grove Town Seventh-day Adventist School, where she secured the highest examination passes - above all other schools in south Manchester.

She was given a scholarship to West Indies College, where she read for a bachelor's in education.

After graduation, she was employed as principal of May Pen Seventh-day Adventist High School, where she worked until she migrated to the United States.

She enrolled at Fordham University, where she obtained a second bachelor's degree. She then continued to work and study. Later, she graduated with a Master of Science in Literacy, Language and Education.

During her hard work and studies, she met the partner of her dreams, Sidney Jones, and on August 15, 1970, they were joined together in holy matrimony, after which she returned to Jamaica and was employed at Belair High School, where she gave faithful service.

Still not satisfied that she was at the top, she returned to Fordham University, where she studied and graduated with her doctorate in education. She returned home to join the staff at West Indies College, which became Northern Caribbean University shortly after. There, she gave sterling service and provided leadership in several areas.

In early April 2009, Dr Jones became ill. She suffered a long period of illness until August 4, 2015, when she departed this life.

After a thanksgiving service at the Mandeville SDA Church on Sunday, Jones was laid to rest at the Bethabara Moravian Church Cemetery in Manchester.