The preacher who smokes the weed 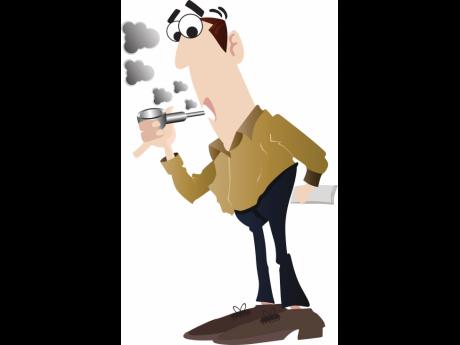 Due to the sensitive nature of the story, the correct name of the subject will not be disclosed. He, however, lives in eastern Jamaica, and is thus 'renamed' Mr East.

East has his own church, and for more than 40 years, he said, he has been smoking ganja (cannabis), and it seems like he's not going to stop anytime soon. He smokes ganja to help him meditate, he said, and to be creative.

"I do it to hold my meditation ... I can go and create something right now because I smoke this, it gives me that kind of vibes," he said, pointing with the little piece of 'spliff' in his hand. However, he said he would never preach smoking ganja from the pulpit.

But what if his congregation, which he said adores him, should discover that he is a closet ganja-smoker? "If my flock knows that I smoke weed, I don't know how they would respond to it, so I kinda keep that private," said the man who smokes the weed every day, except, sometimes, Sunday. And is it about going to church not feeling 'high'?

"I don't smoke and go to church, it just don't feel right. I've done it may be once, I went to church high, and everything was fine, just the same, but as I say, I wouldn't support it or not support it from the rostrum," he told Family and Religion recently.

"They'll just have to work out their own salvation. There is no guilt. If I felt convicted, I wouldn't do it. It doesn't convict me. I'm free in my mind ... call it medical marijuana. I'm doing it for me. Other people do other things. I don't know if they are home drinking their red wine. I don't drink alcohol. I don't know if they are home with their homosexual partner," East said.

He claimed there is no biblical reference against the smoking of ganja. Yet, there is reference in Genesis 1:12, he said, "that God made herbs, and he saw that it was good". And though he smokes in privacy, it seems that East doesn't care if people know that he smokes, as he doesn't find it "offensive to God".

In fact, he said he has been blessed over the years. "There is so much blessing going on in my life, constantly," said the man who also said he's a prophet, an anointed preacher, who has preached 40 straight messages since October. The day when Family and Religion met with him, he was on his way from church where he spoke about faith.

"I am not so much of a gospel teacher, I am an anointed preacher, meaning I hear from God, and the spirit of God come down on me when I'm preaching, always. Sometimes I don't even preach when the spirit takes over the place," he asserted.

His lessons, he said, comes from God, right on the spot when he's preaching, but he always goes to church prepared, if in case "God doesn't turn up". And if you think his ganja-smoking is controversial, his idea of what Jesus looks like is even more thought-provoking.

"I saw Christ in a vision, and he stood up in church and read the entire book of Isaiah. I remember some of his words ... and he was a black man by the way. I couldn't tell if he was a Jamaican, tall African, mixed-coloured American, just in-between everybody, and he spoke to us," East related.

"That night it was one o'clock and I woke up crying. I wept from one o'clock to broad daylight. Saw Jesus, black man standing up preaching. It was powerful."

At the time, he said he was not a pastor, but already a reverend. He has been preaching for more than 20 years, but got saved more than 27 years ago.

Both parents were pastors, and a sister, an evangelist, but he said, "I never really gave my life to God fully until something tragic happened to me. Tragedy brought me to God or you say brought God to me. When I got myself in a situation that no man on earth could help me. And God helped me and showed me that he's real, and then he just took over my life."