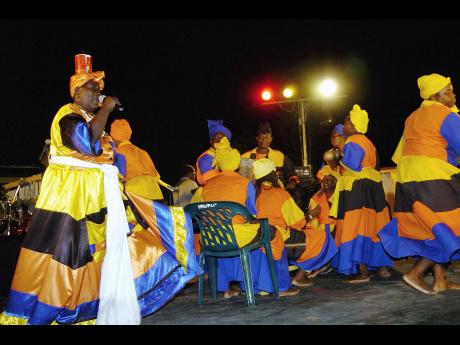 File
FILE Members of the Port Morant Kumina Group during a performnce in 2006. A two-day workshop on Kumina will be held in Morant Bay next Thursday and Friday.

When Congolese were settled in Jamaica as indentured labourers to ease the labour shortage on some plantations after Emancipation, they continued to practise their traditional religious rituals, such as Kumina, which has a high level of retention in St Thomas, where the Paul Bogle-led uprising unfolded in 1865.

And according to University of the West Indies educator and Paul Bogle scholar, Dr Clinton Hutton, "Congo cosmology/spirituality and art played an important role in assisting in the shaping of the outcome of the Great Revival of 1860-61, and the oath-taking ceremonies conducted in the movement led by Paul Bogle in 1865 which culminated in war."

Thus, one of the activities organised by the St Thomas Parish Development Committee to commemorate the 150th anniversary of the Morant Bay Uprising will be a Kumina festival to be held at the Social Development Commission Morant Bay office from Thursday September 17 to Friday the 18th. On Thursday, starting about 10 a.m., Dr Hutton and Dr Maria Smith will be conducting a Kumina workshop, which are open to the public, free of charge.

"The workshop examines Kumina in the context of 1865 and looks at its state of existence through the consciousness of Kumina practitioners. The purpose is to build on the existing body of knowledge of Congolese contribution to Jamaican cultural identity," Hutton told Rural Xpress.

One of the highlights of the two-day event will be on Friday at 5 p.m. when discussions and readings by traditional Malongo priest, Andres Ramirez Machin (Tata NKisy) of Cuban, and his wife Elena Diaz (Yaye Nganga) will be held.

Tata NKisy has been a priest in the Malongo tradition (Congolese tradition) for more than 30 years and in the Yoruba religion for about 20. On his third visit to Jamaica, and sponsored by CHASE Fund, he will be on the island until November 2.

"My spiritual life began very early, when in my home my mother used to practise the main African-roots religions known in Cuba, the Yoruba tradition and the Congo or Bantu tradition, and by means of them, I saw her helping people to make their lives better in every aspect."

Yet, he was also raised in the Catholic faith, in which he studied the catechisms and had "communions with the Lord". And his father, who, he said, was "a very materialistic person" taught him "about the philosophy of the time".

"So with that feeling in my heart, I decided to start looking inside every one of the religions I mentioned before. I read the Bible, and began to study the African traditions, and this way took me into the theosophy world," he explained. A Theosophic religious system is one "based on intuitive insights into the nature of God".

In the world of theosophy he said he found that "every religion in the world are just part of the plan of the Lord, no matter where they are created or, better said, found, because they have always been there as a means that God gives us to understand his power, to know that he is present in every stone, animal, plant ...".

But what exactly will he do in his workshop on Friday, the 18th. "It is to show ... how the Malongo tradition we widely and openly practise here (Cuba) fits completely on the Kumina tradition and vice versa, because they came from the same root and geographic area and how this tradition in its spiritual part can be used to solve problems of the soul and the daily life," the former physics teacher said.