A cry for help for Annotto Bay Health Centre 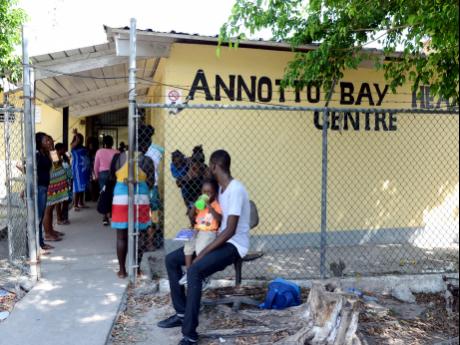 Ian Allen
Persons seek the shade of the trees as they wait to enter the Annotto Bay Health Centre. 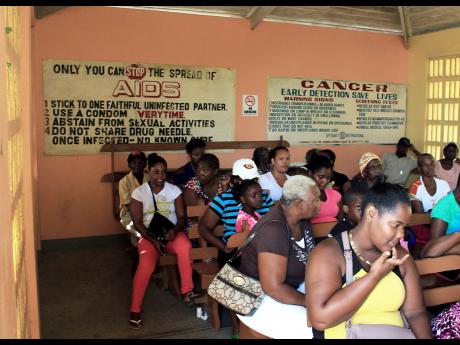 
SEVERAL RESIDENTS of St Mary have launched an appeal to the North East Regional Health Authority (NERHA) and the Ministry of Health to urgently increase staff and equipment at the Annotto Bay Health Centre, which is struggling to cope.

The residents claim the type-three facility is bursting at the seams and in need of urgent treatment as it is ill-equipped to deal with the hundreds of persons who seek medical attention there on a daily basis.

“People a come a clinic from all five o’clock and a pick bush a say them a number one,” said one person when a Sunday Gleaner news team visited the facility last week.

On that day, it was reported that more than 90 persons had been seen in the antenatal section of the health centre, with some persons being turned away while the gynaecologist examined in excess of 80 patients.

“Just for today alone you have 95 pregnant ladies and they had sent back home some, because of the quota they can take for the day,” said Ruel Francis, vice-chairman of the 23-year-old Annotto Bay Community Development and Environment Association.

“And today is just a typical example of overcrowding where patients have to be sent back for another day. This is just the norm here, because of the kind of pressure that comes down on the clinic.”

“The hospital operates in a way where they’re just tending to emergencies and so the pressure is on the clinic,” said Francis.

“A lot of people in the parish, also from Portland and as far as Kingston use this clinic.

“There is a shortage of nurses, doctors, medication; a lot of equipment need to be replaced as a lot of these equipment were here from when the clinic was built in 1989 and are outdated, and some of them actually rotten down.

“We don’t have enough chairs for persons to sit on. The kitchen is an area that is desperately needed, because they have to look after some meals for the young born and no kitchen is in place. We have two water tanks presently and we need another one.”

Francis also claimed there is no security present at the facility during the days, with only a watchman coming on in the nights, and no landline telephone service.

“They also need some more air-conditioning units. Even in the dressing room, the nurse a dress you and it hot so she a sweat and the sweat a drop on the cut and that not healthy,” said Francis.

One pregnant woman said she had reached the centre from early in the morning and was still waiting for medical attention after three in the afternoon.

“From morning mi over here, because a 100-odd persons the doctor see today. It was two in one today, because there was no water last week, so no clinic never keep.”

The expectant mother also complained that there are not enough chairs at the facility and the ones there are old and uncomfortable.

A diabetic patient who was on the outskirts of the premises told The Sunday Gleaner that she has to visit the centre every three months, “and there is no medication and long waiting”.

A nurse also weighed in on some of the problems facing the centre, stating that most of the times the doctors are overworked.

“Like today, we have a specialist clinic and there are already 87 persons here to see the gynaecologist, and this might increase as it goes up to over 100 sometimes,” said the nurse who noted that her workload has also increased.

A doctor at the facility agreed that the staff is overwhelmed, but argued that this is an island-wide problem facing the public-health system.

“There is definitely a shortage of doctors in the primary care setting and the ministry is aware of that,” said the doctor who asked not to be named.

“There is a large number of patients being seen by far too few doctors. They have to increase the capacity of the clinics to manage the load of the patients that need to be seen there.”

Efforts to get a comment from NERHA were unsuccessful up to press time as a promised response was not received.