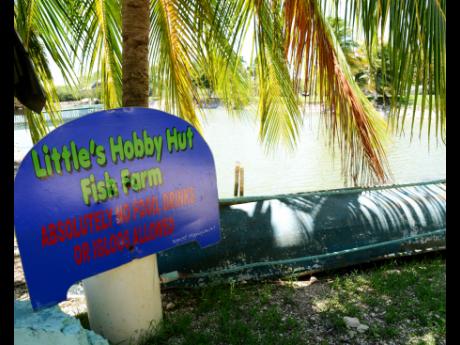 Ian Allen
The sign welcoming visitors to the Little Hobby Hut Fish Farm in Hartlands, St Catherine which is facing closure because of the drought. 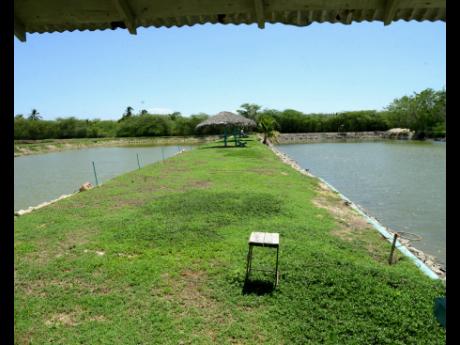 Ian Allen
The two ponds which are still operating at the Little Hobby Hut Fish Farm in Hartlands, St Catherine. 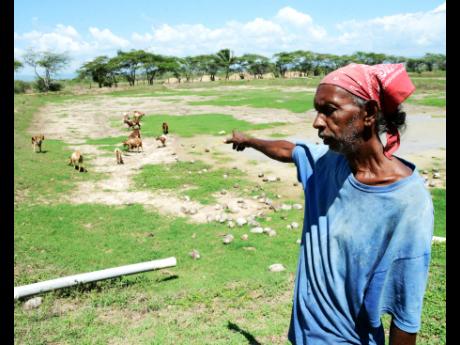 Ian Allen
Lynton Williams points to goats feeding in what was once a fish pond with hundreds of fishes at the Little Hobby Hut Fish Farm in Hartlands, St Catherine.
1
2
3

After losing more than $12 million worth of fish to the drought now gripping the island, the proprietor of the Little's Hobby Hut Fish Farm, Thomas Guyah, is considering his options as he mulls the future of a once-thriving business on his 20-acre property.

Guyah has watched helplessly as water from 12 of the 14 fish ponds on the St Catherine-based farm rapidly disappeared over the last few months. The 14 ponds which once housed hundreds of fish have since become a feeding ground for goats, as instead of water there is now grass.

"We lost thousands of our fish. The water got hot and then all of them died," said Guyah, who has turned over the management of the farm to his son and daughter.

He charged that the current drought is the worst thing to ever hit the business which had managed to survive several weather threats, including storms and hurricanes, during its 19 years of operation.

Located at Hartlands Boulevard, Old Harbour, the Little's Hobby Hut Fish Farm provides an idyllic environment for patrons to relax and fish with an option to have their catch prepared for them to eat straight from the ponds. There are also benches for seating, a kitchen, bathrooms, and other amenities.

The fish farm has attracted thousands of patrons over the years and is frequently visited by groups from schools and churches across the island.

The farm is also used by students studying marine biology at the University of the West Indies. The students would visit the farm at least three times each year to conduct practical exercises as, with its wide assortment of oriental fish, it was an ideal place for experiments.

Given the drought, Guyah was forced to cut his staff complement as well as the farm's opening hours. The fish farm is now open only on Sundays and public holidays.

But with the water still receding from the two remaining ponds, Guyah said he is being forced to consider other uses for the large farm.

The water level in both ponds is now at two feet from a high of seven feet, and the remaining fish are already experiencing difficulties.

"We can't feed them like how we want to feed them. We have to cut back on the feed, because if we feed them too much, they are going to lose a lot of oxygen because of the small amount of water," said Guyah.

It's deja vu for the farmer who was forced to shut down a similar operation in 2004 located just a quarter mile away from the Little's Hobby Hut Fish Farm.

That 19-acre operation was primarily used to raise fish for sale to wholesales, supermarkets and individuals. The business lasted 10 years before praedial thieves forced Guyah to cut his losses and walk away.

"It's just bush, it just grow up with trees and so forth now. The ponds are there, the pump is there, everything is there, but as you put in the fish, they take it out," said Guyah, who echoed a concern shared by several small farmers in Hartlands.

The small farmers all agree that praedial larceny is the most pressing issue facing their community.

Guyah, who grew up on a fish farm run by his father, said he has a passion for farming and has passed this down to his own children. However, he feels there are just too many challenges facing farmers and these are not being adequately addressed by the Government.

"Things have got very, very bad. Right now, one of the vehicles want tyre and we can't even buy it."