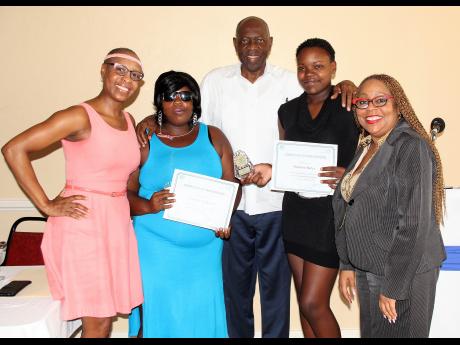 From left: Chairperson of the National Family Planning Board (NFPB), Dr Sandra Knight; Trishauna McQueen, graduate of the Gender Employment Pilot Project; Dr Fenton Ferguson; Shannon Bailey, graduate of the programme; and executive director of NFPB, Dr Denise Chevannes. They were among persons who were in attendance at the NFPB and the United Nations Entity for Gender Equality and the Empowerment of Women programme.

The National Family Planning Board (NFPB) and the United Nations Entity for Gender Equality and the Empowerment of Women graduated their second cohort of young women under the Gender Empowerment Pilot Project.

The pilot project was done in an attempt to improve HIV and sexual reproductive health of adolescent girls and young women through empowerment and the reduction of gender inequalities.

The NFPB also held sessions with male partners, parents and adolescent girls (age 15-24) who were not yet mothers.

In addition to the graduates and their families, attending the ceremony was the minister of health and member of parliament for the eastern division in St Thomas, Dr Fenton Ferguson; the executive director of the NFPB, Dr Denise Chevannes; and the chairperson of the NFPB board of directors, Dr Sandra Knight.

In his address to the graduates, Ferguson spoke of the importance of the project.

"The course that you've undertaken in the past few months is not just about protection of self or dealing with being responsible. It is a holistic course that will make you better persons. It is a course that would have prepared you to walk as role models and to influence your peers. Having this new knowledge is about power and empowerment," he said.

According to Ferguson: "This course was designed to rebuild self-image and confidence in self. To rebuild your focus and in the end give you a new look on life."

The group which comprises predominantly low to moderately literate young mothers reported success in areas such as increased condom usage, improved skills in negotiating condom use, and improved understanding in starting a business.

Some graduates have begun the process of opening accounts at credit unions and some have begun evening classes to complete Caribbean subjects with assistance from the project.