Fenton not off the hook, Holness warns 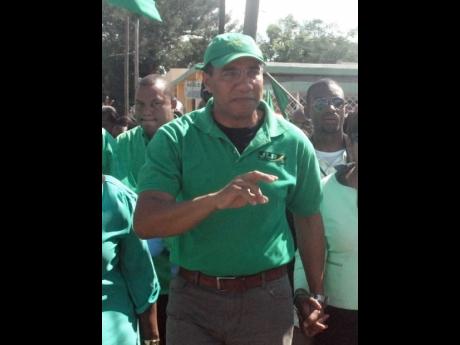 Adrian Frater
Holness ... Ferguson still has some questions to answer at Tuesday’s sitting of the House of Representatives.

Jamaica Labour Party Leader Andrew Holness has served notice that the Opposition is not yet done with Cabinet minister Dr Fenton Ferguson over the dead babies scandal although he has been stripped of the health portfolio.

"He still has some questions to answer at Tuesday’s sitting of the House of Representatives," said Holness at a political rally in Spanish Town, St Catherine Sunday night.

He also criticised Prime Minister Portia Simpson Miller for failing to hold her ministers accountable to the benefit her party.

"The Health Minister was never held to account after he drove the service to a wreck," said Holness.

On Friday Simpson Miller yielded to public pressure and relieved Ferguson of the health portfolio but reassigned him to Labour and Social Security.

"All she do is shift him from the health bus that him crash to crash the social security," Holness told Labourites.

He promised that a Jamaica Labour Party government would deliver a new health care service that guarantees better treatment of Jamaicans.

Health matters aside, Holness took on the platform politics responding to a statement by Simpson Miller that he could not speak like her and would be receiving a whipping when the election is called.

"Me nuh have no paper a read from, it’s because me no speak like her," Holness declared to laughter.