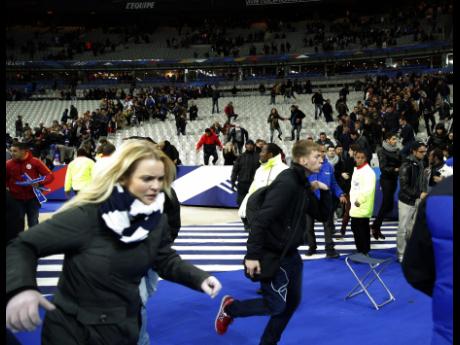 AP
People run for safety in the aftermath of a series of bombings and gun attack in Paris, France.

A Jamaican living and working in Paris, France, is expressing concern for his safety following Friday night's bomb and gun attacks, which left about 129 people dead.

Marvin Evans, a marketing analyst who has been living in France since 2012, says although he has no plan to leave at this time, he is very concerned that there could be more attacks in the future.

Evans, who lives 20 minutes outside of central Paris, where the attacks took place, says he would have normally been at the gym located in one of the areas where the terrorists struck.

He believes that with President Francois Hollande's declaration of war against the Islamic State, there could be more violent attacks in France.

The BBC has reported that in addition to those killed, hundreds more have also been injured and more than 100 are in critical condition.

The attacks are deemed the worst in France since World War II and is the second terrorist attack this year, following January's shooting at the offices of the satirical newspaper, Charlie Hebdo, which left 11 people dead.

He says the city's streets are also being heavily policed.

Evans says he is in contact with other Jamaicans and friends in Paris but there have been no reports of injuries or death. However, he says he will know more in coming days as the French authorities release more information on the victims.