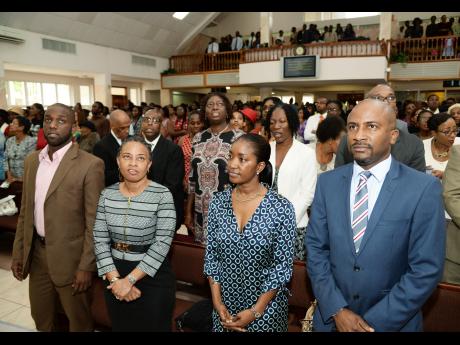 Jermaine Barnaby
Members of the Press Association of Jamaica (from left) Archibald Gordon, President Dionne Jackson-Miller, Jacqueline Burrell and Milton Walker at the church service to launch of the 2015 National Journalism Week at the Andrews Memorial Seventh-day Adventist Church yesterday. 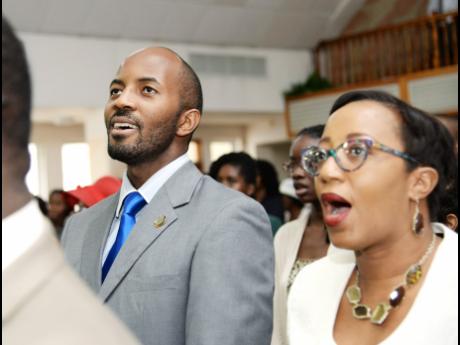 The 2015 National Journalism Week kicked off with a spirited church service yesterday at the Andrews Memorial Seventh-day Adventist Church in St Andrew, as the Press Association of Jamaica (PAJ) broke from the tradition of starting the week on a Sunday.

With several journalists and media practitioners in the congregation, PAJ President Dionne Jackson-Miller pointed to the theme for the week, 'New Media - New Challenges', as she noted the changes taking place in the local media landscape.

"We have seen a lot of changes over the years, and it is something that affects everybody, especially for persons who grew up in the country. You would know that on a Sunday, The Sunday Gleaner would reach you by 10 or 11 o'clock because persons would have to wait until the truck gets to Westmoreland or St Elizabeth. Now you wake up in the morning and before you see the newspaper, the information is on Twitter or Facebook," said Jackson-Miller.

"We are also hearing a lot about mergers and acquisitions and persons are still wondering what will happen in the future, which means we have to keep informed," added Jackson-Miller.

In the meantime, head of public relations at Digicel, Elon Parkinson, has also noted the technology changes as he hailed journalists who are celebrating the week.

"Today, we are experiencing an encouragingly positive interplay between Internet technology and news content developed by some of the finest minds in journalism.

"Digicel is happy to be at the forefront on the technology side, leveraging our vast network capabilities to deliver news services instantaneously to more people via various Internet-enabled devices across Jamaica," said Parkinson.