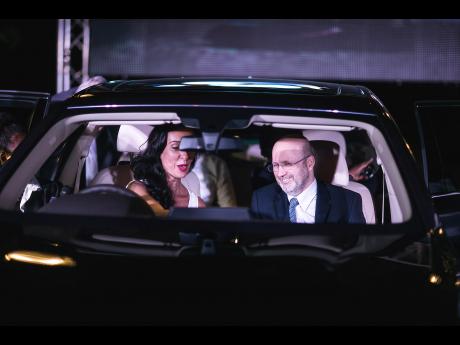 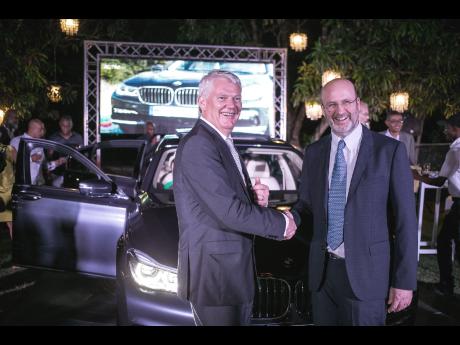 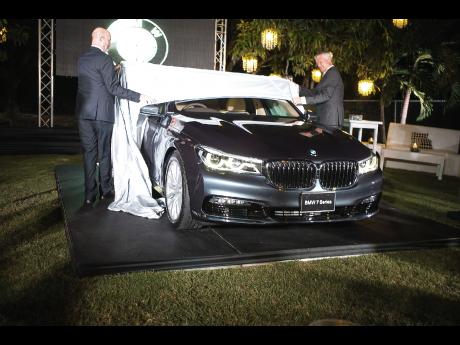 Held at the official residence of the German Ambassador to Jamaica, Joachim Schmillen, BMW enthusiasts and loyal Stewart's customers came to see the latest of the flagship BMW motor cars. The BMW 7 is bound to be another head-turner for those who can afford luxury, and those who aspire to it. General Manager of Stewart's Duncan Stewart said 7 series customers are "progressive thinkers" and whose car is a reflection of their personalities. To those who will drive or be driven in one, he promised the highest quality, absolute precision and driving luxury.

The 7 series comes with more than a few bells and whistles you would expect from a vehicle that costs north of JA$20 million (21.795 at full duty, to be exact). But it's worth every cent. Innovation runs this car. You can exit the vehicle, and by using the key, the car will park itself in the garage.

There are hand-gesture control functions built into the car, which allow you to do things like reject or answer an incoming call with just a wave of the hand. For the executives, the rear section of the car is tailor-made for you. The executive lounge allows you to use your tablet to do everything from check the Internet, to adjust the settings of your seat, including a massage option for when the work day was just brutal.

In effect, when you step inside a BMW 7, it's like you're in two different cars, dependent on which part of the vehicle you're in. The rear has features such as ambient light design, innovative comfort, and entertainment functions that ensure a supreme level of relaxed travelling pleasure.

A folding table and the equipment option rear-seat entertainment make the rear of the BMW 7 Series as a place of retreat. You can adjust your own radio settings, so the people in the front are listening to a different station from you. Trust us, you would probably prefer to be a passenger than the driver.

But don't worry, the driver has plenty of goodies as well. Safety is improved by lane-departure warning, lane-keeping assistant and active side collision protection, among other security features. And by the way, the steering assistance is good up to 210 kmh. Add to that, the active chassis keeps you from feeling like you're rolling over just because you're cornering.

Laser lighting? Sure. Up to 600 metres worth of light distance, so you really should see what's coming. Overall, you get to where you're going in good time, and without getting a few more grey hairs from the trip.

The spanking-new one that was on display is the only one in the island at the moment. But that's expected to change really soon. The car is dubbed as the future of luxury, so why wouldn't you want it in the present?