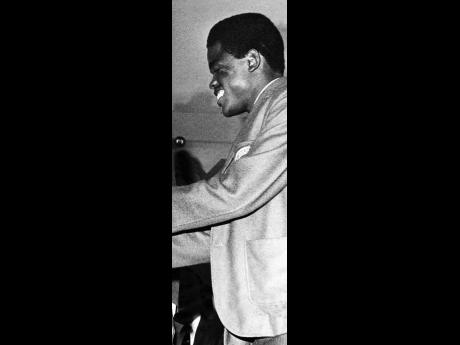 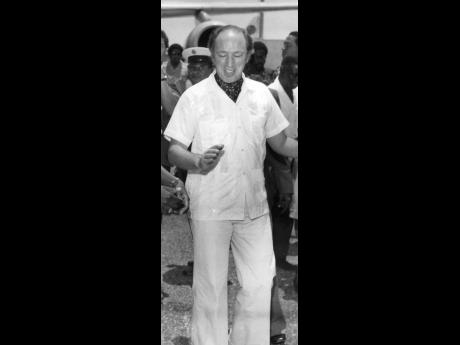 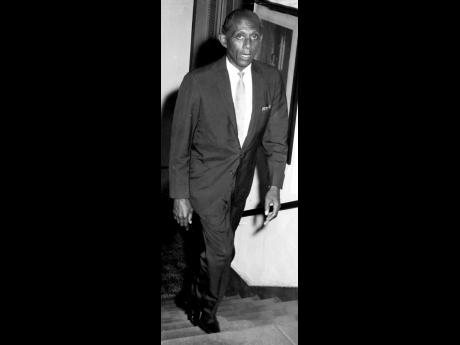 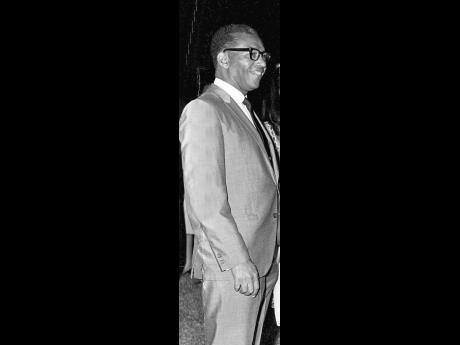 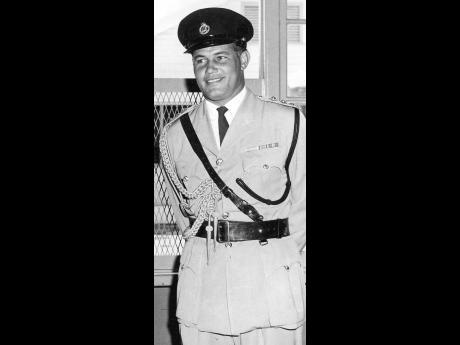 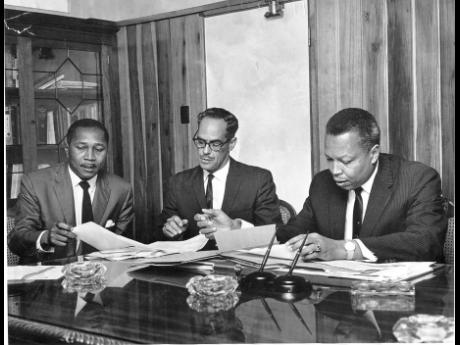 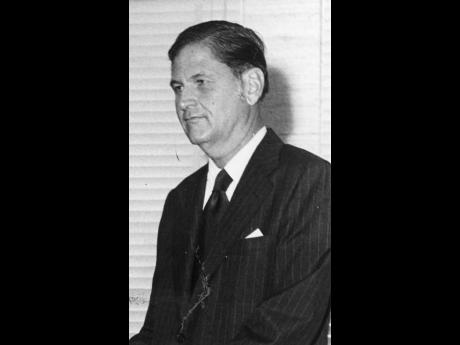 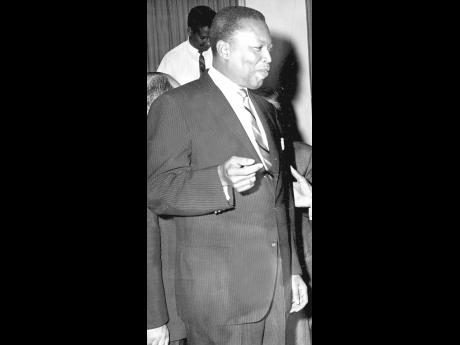 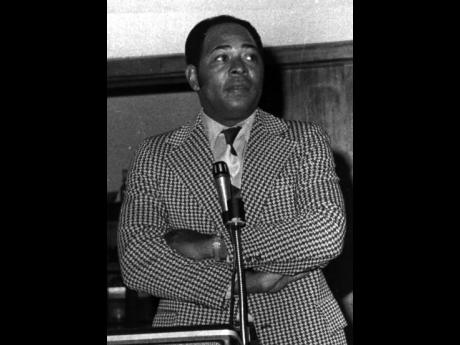 • Rescue aircraft groped through overcast skies searching for a US C123 transport plane missing for three days in South Vietnam's central highlands with six Americans and 73 Vietnamese aboard. Authorities said the Americans include five air force crewmen and a military passenger. The Vietnamese are soldiers, their wives and children. Dependents often accompany Vietnamese soldiers being ferried between camps. The US command withheld the announcement because of security reasons, and declined to give details about the flight or the location of the search to protect any survivors from capture by Communist troops.

• A new Jamaican bank came into existence when the Bank of Montreal Jamaica Ltd officially commenced business in the island. This is the latest Jamaican bank to enter the local banking market. It replaces the Bank of London and Montreal (BOLAM) which had been operating here for the past 15 years. William Jones, who was the former general manager of BOLAM, continued as general manager of the Bank of Montreal Jamaica Ltd, with its head office on Harbour Street, downtown Kingston. There is also a branch in Half-Way Tree, St Andrew, and another to be opened soon in New Kingston.

• Pope Paul VI visited Australia, a predominantly Protestant land, bearing special greeting for all the brothers of the Christian churches. A small crowd of about 4,000 was at the airport to see him arrive from the Philippines, where an attempt was made on his life. But tens of thousands lined Sydney's streets to cheer as his motorcade drove into the city.

• Hundreds of unemployed men converged on Kingston and St Andrew Corporation's (KSAC) offices on Church Street, downtown Kingston, demanding tickets which would entitle them to special Christmas jobs in the Corporate Area. The men, who were carrying out their second demonstration in less than a week, forced their way into various sections of the corporation's offices, shouting that they were in need of work and had come for job tickets. Summoned by the town clerk, the police took up various positions along the corridors of the building, but the crowd, which gradually grew noisier, continued to block the entrances. One man attempted to enter the Mayor's Parlour by climbing on a section of louvre blades which crumbled under his weight. Councillor Emerson Barrett, the mayor, said he longed to see the day when the rush on the KSAC's offices would cease.

• Prime Minister Hugh Shearer held discussions with members of a commission appointed by the president of the United States of America to carry out investigations into some of the problems with which Jamaica may need assistance, and to determine what assistance can be given and in what areas. Vincent deRoulet, US ambassador, and George Roberts, deputy chief of mission at the embassy, accompanied the visitors. With Shearer were James M. Lloyd and J. Barker McFarlane, his permanent secretaries, and Hartley Neita, his press officer.

• The services of Cable and Wireless (West Indies) Limited were halted as a result of a strike by 250 unionised employees of the company over the company's failure to appoint a Jamaican to a post held by a foreigner on contract. The workers were represented by the National Workers' Union. A spokesman for the union told The Gleaner there was a qualified Jamaican on the company's staff fit for a job being done by a foreigner. The spokesman said the foreigner was on contract to Cable and Wireless, and whenever his contract expired the company continued to renew it, instead of appointing the Jamaican to the post.

• Debate started in the House of Representatives on a Private Member's Motion, moved by Noel Silvera, People's National Party member for Central St Mary, calling for the introduction of a scheme to insure members of the police force against injury and loss of life. Minister of Home Affairs Roy McNeill used the opportunity to make a statement on measures being taken by the Government to combat crime in the island, with particular reference to acts of violence. The House was adjourned but the debate will continue at the next sitting.

• Police from the Mobile Reserve and the Criminal Investigation Department, under the command of Assistant Commissioner Owen Stephenson, carried out raids in the hills of Grants Pen, St Thomas, which uncovered what is believed to be a camp used for military training. This was determined based on the fact that apparatus used for an assault course in military training was found. The police had received information that what appeared to be military training was taking place in the hills. As a result, the raids were carried out. No one was arrested during the raids, however, several rounds of spent ammunition and a large quantity of goods were found and seized.

• Eastern Airline's first direct flight from Montego Bay to New York got under way. Flight 990 took off almost full. The New York to Montego Bay run was inaugurated with the arrival of flight 991 in Montego Bay. The plane went on to Kingston, remained there overnight then returned to Montego Bay to make the round trip.

• British Trade Commissioner James R. Cross was released into the custody of Cuban officials by terrorist kidnappers who held him in captivity for 60 days. The kidnappers were awaiting an arranged flight to Havana as the price for Cross' release. Prime Minister Pierre Elliott Trudeau told the House of Commons that he had spoken to Cross by telephone and that negotiations for his release were in the closing stage. Quebec Premier Robert Bourassa also spoke by telephone with the 49-year-old Briton, and reported that Cross was in excellent shape and excellent spirits. Negotiations had provided that Cross be placed in the custody of Cuban representatives until the kidnappers were given passage to Cuba.

• Cable and Wireless (West Indies) Limited employees resumed work and external communications link returned to normal. The strike which began Tuesday, because of the non-appointment of a Jamaican to a post currently being held by a foreigner, was resolved as a result of the personal intervention of Prime Minister Hugh Shearer. At the meeting, held at the Office of the Prime Minister, representatives of Cable and Wireless, the National Workers' Union and the Ministry of Communications and Works agreed that Mr H. Hawkins (a Jamaican) should be appointed to the post of deputy general manager/branch engineer.

- Vere Technical High School, wasting no time in ruling their own roost, neutralised Kingston College's first-leg lead with a 55th-second goal. They struck again with another two minutes from time and so retained the Olivier Shield on a 2-1 goal aggregate, amid jubilation at Hayes, Clarendon. Once the Vere machine clicked into operation, the outcome of the issue was predictable. Fighting for every ball, attacking their rivals at varying paces and angles, Vere left KC in a whirl, as they were unable to match Vere's slickness. Goal-getting Anthony Douglas got his colleagues to revolve around him as an authority, as his school etched their name on the symbol of local secondary schoolboys football supremacy for the third successive year.