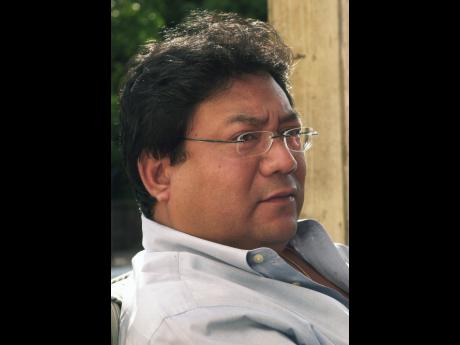 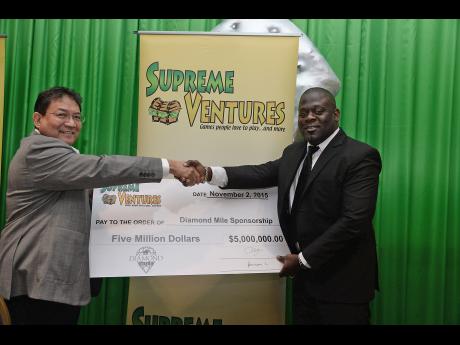 Supreme Ventures Limited (SVL) is a major sponsor of the Diamond Mile, Jamaica's richest horse race. SVL is also one of two bidders for the soon-to-be divested Caymanas Track Limited (CTL), and its chairman, Paul Hoo, spoke with The Gleaner about the horseracing industry and shared his insights about SVL's prospects for the future.

With some 1,400 outlets across the island from Aboukir in St Ann, to Kingston, Hoo believes SVL is perfectly poised to take on the opportunities that would arise and any responsibilities that would be added were they to be granted CTL. Their existing network provides an excellent platform for growth in an industry that has somewhat stagnated over the years. That gives SVL more synergies than its competitor, the newly formed Caymanas Entertainment Limited, the second bidder for the island's sole horse-racing facility, which is presently losing $70 million a year.

The prospective operators have three options: outright purchase, leasing it for 40 years or leasing it with an option to purchase. Hoo and his team are opting for the latter. He sees the facility as having great potential for growth and development with Jamaicans being ranked fifth worldwide for their love of horse racing.

"Wherever there is horse racing in the world, Jamaicans are attracted to it, so we see an excellent opportunity for exporting our product through simulcasts, which would be an immediate foreign exchange earner," Hoo told The Gleaner. He expressed faith that the committee that is tasked to make the selection is comprised of professionals who will make the right decision. "I have the greatest respect for the divestment committee and the work they are doing, so I would not like to preempt them by going into the specifics of our bid, which is under consideration," said Hoo.

The creation of family-friendly areas and activities and private boxes for individual or corporate use are necessary and worthwhile improvements that Hoo believes will enhance CTL no matter who runs the racetrack. The security of the racing plant and its personnel is something the he believes is of high priority. According to Hoo, those who are worried about SVL increasing their footprint in the gaming industry or its lack of experience in that industry need not fear.

"We are a transparent and highly regulated publicly listed company, with a proven track record of running a successful business that makes an enormous contribution to the economy of the country. We have been sponsoring the two-year-old series through our Lotto Race Day annually for 10 years and we will continue our unwavering support of being the biggest sponsors of racing in Jamaica," Hoo said.

Also personally involved in horse racing, Hoo is an owner of some fine thoroughbreds both here and in Trinidad.

He noted that prior to the establishment of SVL, the gaming industry was making annual revenues of $3 billion and prominent industry players at the time went on record saying the industry would top out at $4 billion. However, since SVL's entry, and the addition of new technology, revenues have grown tremendously, with those of the publicly traded company being in excess of $40 billion.

"We believe that we are uniquely and strategically placed to engineer growth for Caymanas and the racing industry which will result in a significant increase in the Government's revenues," he added.

"It has always been SVL's view that with the largest online network in Jamaica and the Caribbean, we would be able to provide additional commercial services as we do for Flow and Digicel," Hoo said. In the longer term, he envisions the network being used as a backbone for the delivery of government services such as the payment of pensions and collection of taxes.

If this deal does not go in their favour, The forward-thinking SVL has plans to continue supporting racing and to expand its offerings in sports betting. The recently introduced live betting with the new IFLEX platform enables customers to bet on a game while it is in progress through their Just bet brand. SVL will soon be introducing mobile/telephone betting which will take advantage of the Mobile Money capabilities being introduced into the market.

In collaboration with ATL, a new weekly car raffle game has been added to the mix of offerings on the SVL platform. Each week a lucky player will win a new car, and so far, the first winner has claimed his prize of a new car. "We are always thinking of ways to please our customers and put more revenue into the island's coffers," he said.