Weary while waiting? – followers’ fatigue should be shaken off, says pastor 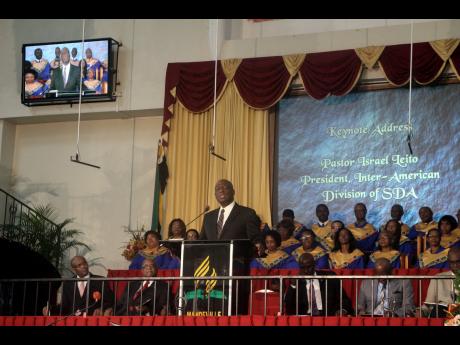 It has long been declared by ministers of religion, saints of God and even those not aligned to a faith that the Lord's second return is imminent, as evidenced through the signs of the times: It could be any day now.

In Mathew 24:36 it says, 'But about that day or hour no one knows, not even the angels in heaven, nor the Son, but only the Father'. Could this lack of knowledge be the reason why so many have become weary while waiting? Or could it be that the word 'soon' measures time relatively?

According to the president of the Inter American Division of Seventh-day Adventist, Pastor Israel Leito, many have become weary and have decided to stop following Christ. However, this should not be. He is of the belief that an unconditional love for God, coupled with his added strength, is able to keep us joyful and optimistic at the thought of seeing our Lord and Saviour.

"This issue of followers' fatigue is a real issue. It is not only today, but Jesus had to contend with that. He had the very same problem for John said 'for that time many of the disciples went back and were no more'...what causes people to fall into this thing of follower's fatigue?"

He added, "Unless we allow the Lord to do something special with us - our attention span will not carry us to kingdom come. We need that Holy Spirit to guide us every day, to lead us every day, to tell us not to give up ...it is just around the corner."

A life without God, he says, is no life at all as time and time again many persons have left the fold seeking something better only to return having realised that the joy of having a relationship with the heavenly Father is incomparable.

Despite the challenges he said we are here to follow the Lord and nothing should allow us to turn away from the Lord.