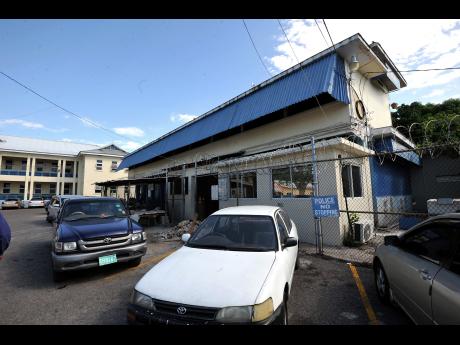 Norman Grindley
The entrance to the lock-up at Half-Way Tree.

Tradesmen are working feverishly on the lock-up at the Half-Way Tree Police Station in St Andrew, clanging and banging away in the jail, but it seems almost certain that the cells, which were recently closed due to overcrowding and other unsanitary conditions, will not be ready this year.

"Work is going on every day. It is being worked on. See the man dem up there working on it. They are working on it seven days a week," said Senior Superintendent Millicent Sproul-Thomas, the head of the St Andrew Central Police Division, for which the Half-Way Tree Police Station lock-up is the main holding area.

"Work is being done, but I couldn't give you a time line. That is more than my pay scale," added Sproul-Thomas last Monday as she directed our news team to take any further queries about the refurbishing of the lock-up to the Police High Command.

The Sunday Gleaner understands that all the persons who were being held at the Half-Way Tree lock-up were moved to the recently refurbished Denham Town Police Station in downtown Kingston after the facility was ordered closed following an inspection by officials of the Kingston and St Andrew Public Health Department.

But with Denham Town struggling to hold the increased number of prisoners, the High Command has indicated that every effort will be made to refurbish the Half-Way Tree lock-up as quickly as possible.

When our news team visited the lock-up last week, more than a dozen workers were seen inside the building's tight spaces, but Andrew Henderson, who identified himself as the foreman, said it would take at least another two months for the lock-up to be ready to house inmates.

"No, it won't be ready. I can tell you that. It can't be. The work is going good and a lot of things done already, but it won't be ready by Christmas. We have to finish up all that we have to do, and on top of that, the building has to air out. We don't even start paint the hallway yet, and all of this will be oil paint," said Henderson.

Last week, the workers concentrated on the lower floor of the lock-up, where they dressed freshly paved concrete slabs used for sleeping, painted the cells, and erected steel bars made of recycled train tracks.

A mixture of cement, sand, and rock chips lay strewn across the tight corridors in the facility.

One female painter, who identified herself as Sandy, said she had worked on the refurbishing of police lock-ups in St Elizabeth and Constant Spring and at the Horizon Adult Remand Centre, and the condition of the Half-Way Tree Police Station, although bad, were not so bad.

"When we came, we had a lot of debris on the wall to clean off, and there was a lot of cleaning up with the garbage, and so on. So that took time. But here, we don't see a lot of things like the sawing off of the grille like at Gun Court, where you can definitely see where the inmates are trying to escape," said Sandy.