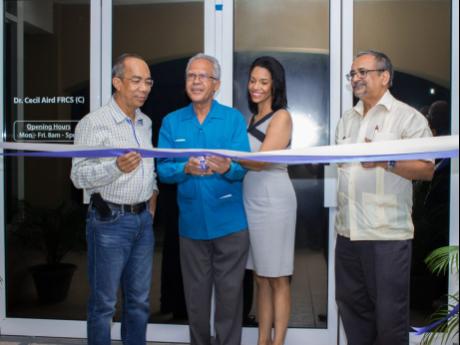 The country's young surgeons now have access to specialist training in hand surgery with the opening of the Carnegie Hand Institute and Surgery Centre (CHISC) at Whitter Village in Montego Bay.

The state-of-the-art facility, the first of its kind in the Caribbean and a replica of the Tampa Bay Hand Center in Florida, was officially opened by executive director Dr Cecil Aird, last Thursday.

Aird's aim is to pass on the knowledge and skills he has acquired over the past 30 years to young surgeons.

Valued at US$250,000, the facility is equipped with all the equipment Aird used in the United States, where he operated a successful surgery centre before returning to his homeland.

"We hope to deliver the same service that was delivered in Tampa right here in Montego Bay," he told the gathering.

The move has been welcomed by senior medical officer at the Cornwall Regional Hospital (CRH) Dr Delroy Fray, who revealed that discussions were ongoing to set up a system to expose young surgeons to the technique.

Describing the opening as historic, Fray said it was a significant day in the history of Montego Bay, the parish of St James, the entire island, and the Caribbean region.

"It is a complex institute. It's a direct replica of the hand centre Dr Aird operated in Tampa, Florida, and it's of a fine standard," said Fray, speaking glowingly of the centre while revealing that CRH and Aird were in talks on how to collaborate.

Named in honour of Jamaica's most outstanding hand surgeon, the late Dr Alfred Carnegie, the centre caters to the medical needs of patients with acute and chronic hand problems common to athletes, accident victims, arthritic patients, and professionals impacted by repetitive hand movements.

Underscoring the importance of hand conservation, Fray said the CHISC is equipped with technology for that purpose.

"The hand is a very complex organ, and when it becomes non-functional, to build a prosthesis even in the year 2015, with all the technology that we have available, it's hard to reproduce what the hand does. Therefore, it's absolutely important that the hand function is preserved at all cost."

One of Aird's patient, OJay Duhaney, a gunshot victim and psychology student of the University of the West Indies, who last year benefited from hand surgery done by Aird in the US, lauded the hand surgeon's professionalism and welcomed the addition of the state-of-the-art facility to western Jamaica.

Duhaney, who received four gunshot wounds to the hand, has regained full function of the limb.

The establishment of the new medical facility was also well received by Dr Horace Chang, member of parliament for North West St James.