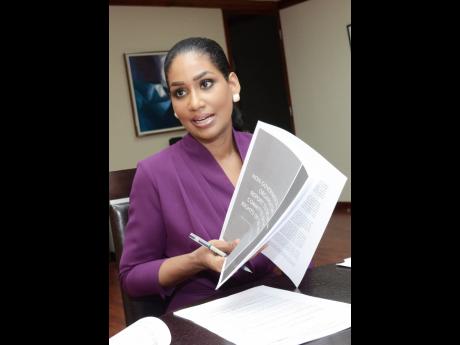 Rudolph Brown
Hanna: The evidence has confirmed the uncaring and boorish approach exhibited by Mr Leonard Leslie in his handling of the removal of a 6-year-old.

Rosalee Gage Gray, the CEO of the Child Development Agency (CDA) has been instructed to initiate disciplinary proceedings against members of her staff for their handling of the removal of a group of wards from a child care facility.

In a report on the removal of the wards, the Office of the Children's Advocate said there was an indecent haste by the CDA to remove the wards from Sunshine Child Care Facility in St Catherine and that the process of removing them left much to be desired.

Youth Minister Lisa Hanna today issued instructions of disciplinary proceedings against CDA's officers following the receipt of a report from the Officer of the Children's Advocate.

In making a statement to the House of Representatives today, Hanna said there is evidence from the report, that persons within the CDA failed to honour their responsibility.

"It is people who make up organisations. We can provide systems and regulations but in the end, it is people who have to implement them. The conduct of a few individuals in this instance ran contrary to the spirit and intent of the Child Care and Protection Act and the policies of this Government," Hanna said.

"The evidence has confirmed the uncaring and boorish approach exhibited by Mr Leonard Leslie in his handling of the removal" of a 6-year-old, said the report authored by Children's Advocate Dianne Gordon Harrison.

However, other CDA staff members are also in trouble.

Some 34 children were living at the home from which they were removed by the CDA despite the operator of the home getting a court order to remain at the premises.

The children were reportedly bundled up and carted away to other facilities.