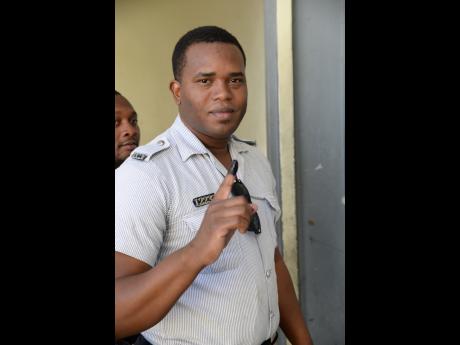 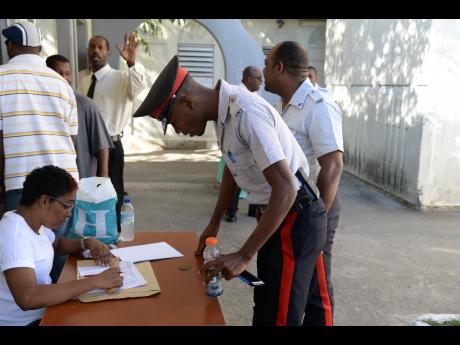 “We started right on time. I don’t mean one minute past eight,” Sergeant Julene Stewart told The Gleaner team when we caught up with her at the Police Academy at Twickenham Park, St Catherine, some two hours after the polls opened for police personnel.

With six polling stations on the compound voting was going smoothly with a steady flow of policemen and women, including those in training and resident there.

However, there were a few minor glitches with some retired officers turning up only to be advised that their names were now on the general voters list. Then there was a case of one police officer who was transferred to the Academy, but was still required to vote in another police division.

The Gleaner caught up with Corporal Orlando Walters of the Inspectorate of Constabulary Division who explained that his team was mandated to monitor the presence and effectiveness of police personnel assigned to man the polling stations.

Having already visited the Denham Police Station in west Kingston he was satisfied that things were going according to plan.

He explained: “Though you have the election workers, we still have to provide some sort of monitoring, monitoring the police officers to ensure they are on the ground and doing what they are supposed to be doing. So we are moving from polling station to polling station doing those checks. That is our duty for the day. We are not so much interested in how it is going in regards to election workers doing their jobs, is just the police we are focusing on and things are going according to plan as the Operations Branch would have stipulated.”

At the nearby Jose Marti Technical High School where voting for civilian election day workers was taking place, the name of one woman assigned to work as a ‘one day police’ could not be found on the list. She, however, gave the assurance that she would take the time off to vote on Thursday.

The turnout there was sparse with first time voter Monique Goldson showing her ink-stained finger after voting and telling The Gleaner she had decided to exercise her franchise because she believed her vote could make a difference.

Over at the Edgewater Community Centre in Portmore, St Catherine there was a steady turnout from very early but the going was slow. In fact “smooth but slow” was how Sergeant Grace Ffolkes summed up the situation.

Over at the Greater Portmore Junior Centre the situation was basically the same with voters standing in line patiently waiting their turn.