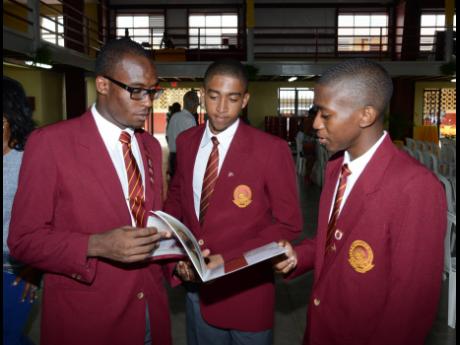 In the 2016 edition of the Educate Jamaica's Caribbean Secondary Education Certificate (CSEC) rankings, only one all-boys institution has made it into the top ten.

Wolmer's Boys School moved up two places and was ranked ninth for its performance in the 2015 sitting of the CSEC exams.

When compared to Wolmer's Boys School's jump into the top ten, the remaining all-boys institutions were found lower in the rankings.

It is for this reason that chief executive officer of Educate Jamaica, Ainsworth Darby, wants more to be done to improve the educational outcomes of boys.

"The evidence and data speaks for itself. Focusing on our boys is long overdue and we need to do something about the achievement deficit our boys face," he said.

According to Darby, "The Ministry of Education needs to formulate a policy and strategy or some kind of intervention that all schools can use. They might have to tailor it a little to suit their specific schools because schools are individual and they have individual needs and approaches but at least there is a framework that they can start with to help the boys.

At the same time, 60 per cent of the schools in the top ten rankings are all-girls institutions.

Bishop Gibson High School for Girls has made the biggest jump in the latest ranking of the top ten schools with students leaving grade eleven with at least five subjects, including mathematics or English language. The Mandeville based institution inched its way to tenth place, up from its previous ranking of sixteenth.

Immaculate Conception High has regained its top spot, knocking Campion College back down to second place.

DeCarteret College plunged in the rankings, moving from a ninth place ranking last year to 25th this year. St. Andrew High School for Girls also dropped out of the top ten rankings from its previous ranking of fourth place to 11.

Meadowbrook High made a noticeable jump, moving from 29th place last year to 19.