The economy would come to a halt without UWI graduates -- Jarrett 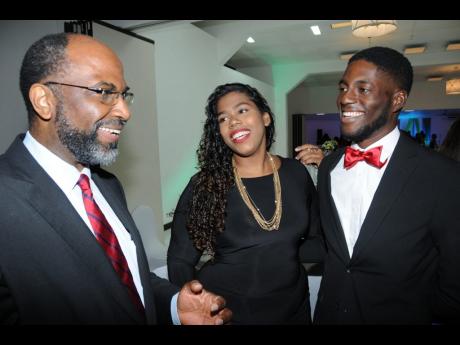 Contributed
Ria Rawlins (centre) and Kareem Panton (right) having an exchange with Earl Jarrett, general manager, Jamaica National Building Society, during the inaugural hall dinner for New Hall at the University of the West Indies, Mona.

Consider a day without a single graduate from the University of the West Indies (UWI) in the workforce.

That's the journey Earl Jarrett, general manager of the Jamaica National Building Society, invited students and administrators of the UWI to take recently, as he underscored the profound contribution of the university to Jamaica and the Caribbean.

Borrowing from the concept of the 2004 Sergio Arau satirical film, A Day without a Mexican, which underpins California's dependency on Mexican immigrants, Jarrett charged that, "If we were to call for a day without UWI graduates in the workplace ... Jamaica and the rest of the Caribbean would come to a full stop."

Jarrett was addressing some 200 student residents and university administrators at the inaugural dinner of the recently opened New Hall, developed by the John Lee-led modern living outfit, 138 Student Living on the Mona campus.

Former Jamaica prime ministers P.J. Patterson and Bruce Golding, as well as Prime Minister Dr Ralph Gonzalves of St Vincent and the Grenadines are also graduates of the UWI.

"It is the education provided by the UWI and similar institutions that has given rise to a cadre of young professionals - doctors, lawyers, business persons, teachers, engineers and leaders in the Jamaican private and public sectors and, by extension, have improved the outcome for many families," added Jarrett.

He pointed out that the rise of the middle class in Jamaica is juxtaposed with increased access to tertiary education for the masses.

"The emergence of the Jamaican middle class over the past five decades demonstrates mainly that improvements in income, at the individual level, were influenced most significantly by higher education," he maintained.

"Therefore, the thrust in the 1960s and 1970s to enable greater access to the University of the West Indies has resulted in thousands of trained students who are now contributing in all spheres of public- and private-sector endeavours."

Jarrett argued that a close look at Jamaica and the Caribbean's management structure would show that graduates of the UWI are the ones positioned to provide leadership and guidance.

"It was the university that helped to make me what I am. My outcome is a direct consequence of my university experience, a direct outcome of participating in the Guild of Students," the 2015 Private Sector of Jamaica Hall of Fame inductee mused.

"The university experience is one of the most transformative experiences that you'll ever have. And, through tertiary education, your lifestyle and your life choices will be altered," he affirmed.

Jarrett, an accountant by training, urged student residents to take their university education very seriously; and not only to use the campus as an environment for academic learning, but to sow and nurture leadership skills, as well as to build strong, useful networks that will serve them throughout the rest of their lives.