Diary of a Ghetto Priest | What is a family? Where do I belong? 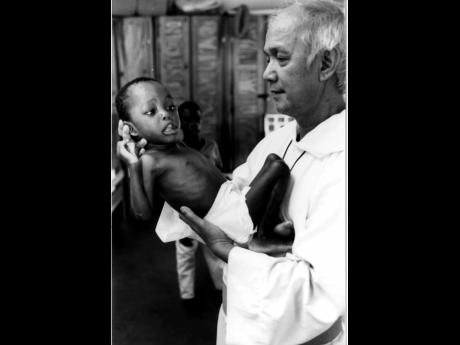 File
Father Richard Ho Lung with one of the suffering children that the Missionaries of the Poor see as family.

In this modern world, the most basic unit of society - the family - is disturbingly endangered, strongly misused, and politically the most misunderstood word next to love. As the world advances in the fields of science, business, law and politics, the value and respect for family life declines. This is the irony of progress. T.S. Eliot rightly said that we are "... in an age which advances progressively backward."

The Missionaries of the Poor seek to uphold the respect and value of family life by being a true family to everyone, especially to those who need the love and mercy of Christ. This reminded me of Patricia.

Patricia came to us. She had HIV-AIDS. She has a six-year-old son. Her babyfather (the father of the child) left her the same night the neighbours started throwing stones at their house because they found out that she was sick. She and her son sought refuge at her mother's in the countryside. But when the illness progressed that made Patricia bedridden, her mother (at age 75) could no longer take care of her, and Patricia's relatives refused to care for her.

The Brothers took her in at the Lord's Place, a home where we take care of abandoned persons with HIV-AIDS. The Brothers attended to her needs on that same day: one bathed and fed her with chicken soup, the other Brother dressed her bedsores and gave her medicines, while another one cleaned the dormitory she was in.

I asked Patricia a week before her passing: "Patricia, what do you want?" She spoke so softly, struggling to push the air out of her mouth, "I want forgiveness from God ... I want to see my son and my mother."

"Do you want to be baptised and receive the love, mercy and forgiveness of Christ?" She said, with a faint smile, "Yes, I do, Father." I baptised her on her deathbed that same day. Brother Nowell arranged for her son and mother to see her. Upon seeing her mother and son two days after baptism, Patricia told the Brothers: "Thank you, Brothers. Thank you for being my family. You will always be in my heart." Patricia slept with her God.

Like Patricia, we belong to the same spiritual family, the family of God. This family embraces everyone, regardless of health, wealth, religion and race. It supersedes our biological family. The biological family should imitate the virtues of the spiritual family: love, care, concern, forgiveness and generosity. In this family of God, one does not seek the best for himself/herself, but seek only the best for the other: the weakest, the most vulnerable, the least. In them we will find Christ. This is what Christ did. This is what we need to do as Christians, as children of God. For Christ said in Matthew 25:40 - "Whatever you did for one of the least of these brothers and sisters of mine, you did it to me."

Let us do our part as Christians to promote, as well as defend, family values for all.

Diary of a ghetto priest | The miracle of family