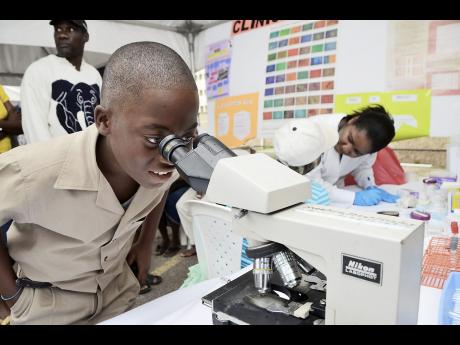 Rudolph Brown
In this file photo, a youngster looks through a microscope at the National Public Health Laboratory which is slated to start hosting UTech students who are in the final year of their medical technology programme.

Twenty students from the University of Technology (UTech) are hoping that the Ministry of Health will stick to its promise to allow them to start practical training tomorrow, even though this is more than a month later than scheduled.

"We had initially been told that we would start the key practical training six weeks ago, but we were called on the morning and told that this was delayed, so now that they have given us this new date, we are keeping our fingers crossed," one of the students told The Sunday Gleaner late last week.

The students have had their lives put on hold by what was described as 'internal issues' between the Ministry of Health and the National Public Health Laboratory (NPHL).

The 20 students are into the final year of their medical technology programme, which requires them to undertake at least two of the five competencies at the NPHL.

The practical section of the students' course should have started on January 30, but six weeks later, only two of the students have been able to complete some of the 24-week practical programmes elsewhere and are now waiting to do two other aspects at NPHL, as these are not offered elsewhere.

The remaining 18 students are waiting to do their entire 24 weeks at NPHL.

"Our primary concern with regard to this unfortunate situation is being able to meet the graduation deadline for this academic year," one of the affected students expressed to The Sunday Gleaner.

"The initial practicum schedule would have been from January 30 to July 14. As it now stands, this is no longer possible, and the time lost will have to be added to the initially prescribed time frame," added the student.

Acting dean in the College of Health Sciences at UTech, Dr Janet Campbell-Shelly, explained that as part of the students' training in medical technology, they have to rotate through the NPHL and cannot graduate until they have completed all the competences.

"There are some internal things that are being sorted out at the National Public Health Laboratory that, at this time, is preventing the students from going to the site," said Campbell-Shelly days before the new date was announce.

"We are trusting that their internal issues will be sorted out as soon as possible so that the students can be placed as quickly as possible," added Campbell-Shelly.

She said all will be done to try and ensure they finish in time to make November's graduation ceremony.

"If they can start quickly, we want to see if they can go for longer hours in the days, or if we can extend a little more in the summer before it impacts on graduation," said Campbell-Shelly.

But the students' concerns go beyond graduation, as many had quit their jobs to be ready for the initial January 30 start date.

"We are now in limbo, as we are unable to give up these (rented) accommodations as we have not been told anything specific," one student shared.

"Having completed all the prerequisite credits to qualify for the practicum, and having also furnished the payments of $127,000, we think there needs to be more alacrity in resolving the matter.

"Many of us have had to delay important and momentous decisions. For example, a student has had to delay, indefinitely, a necessary surgery as the anticipated recovery time would have likely infringed on the initial internship timeline," the student pointed out as he added his voice to those hoping that this time the practical course will begin as scheduled.