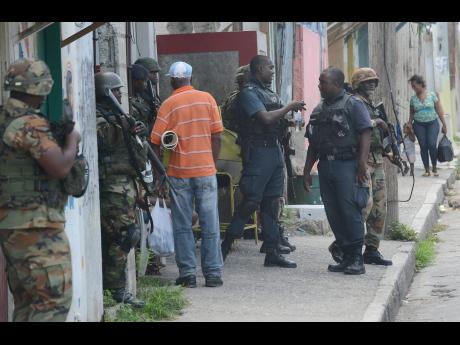 File
Members of the security forces on patrol during a curfew in West Kingston. 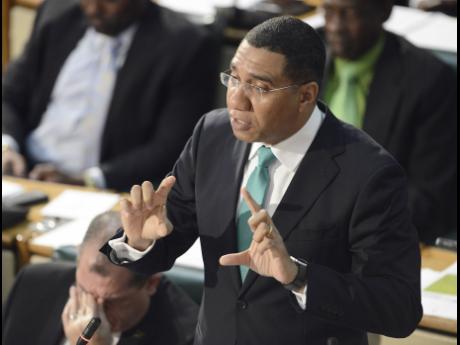 File
Prime Minister Andrew Holness in Parliament recently announcing the introduction of the Law Reform (Zones of Special Operation) (Special Security and Development Measures) Act. AT TOP: Members of the security forces on patrol during a curfew in West Kingston.
1
2
3

The response to the bill from the usual chattering classes has so far been rather muted, some have expressed wariness that the measure may be open to abuse like others before it, but this column has heard no vociferous or sustained reaction to the bill.

It is not the intention of today's column to energise the 'resistance' base, or to show our unique powers of interpreting and foreseeing long-term negative implications, as seems to be the default position of too many persons. Rather, in today's

column, it is the intention to share with readers the provisions of the proposed act

to facilitate knowledge and meaningful contribution.

Objective of the Zones of Special Operations Act

In a nutshell, the act empowers the prime minister in the National Security Council to declare certain geographical areas, which fit a particular description, to be treated as a zone of special operations.

Once a 'Zone' is so designated, select security personnel will be able to impose curfews, cordons, to conduct searches of people and property and to detain and arrest persons in circumstances set out in the proposed legislation.

Section 4, subsection 2 of the act sets out the preconditions for a geographical area to be designated as a Zone.

The section provides that the prime minister ... may declare any geographical area within a single continuous boundary, as a zone of special operations "where there are reasonable grounds to believe that due to rampant criminality, gang warfare, escalating violence and murder and the threat to the rule of law and public order, it is necessary to do so".

This column has no problems with this section. Sure, the implementation of the section could be politicised, sure, the human rights folks will yell "discrimination"; however, nothing tried, nothing done. We must press ahead.

In the first instance, the prime minister's order that a particular locale be determined a Zone may not exceed 60 days (Section 4(1)). However, the Government may extend that period for up to 120, pretty much unilaterally upon consultation with the special security forces referred to in the act.

Identification of members of Joint Force

We consider Section 11 of the act worrying and feel it should be deleted. The section empowers the Joint Command to determine the method by which the identity of each member of the Joint Force (that is, the security personnel on the ground) may be ascertained.

In the interest of transparency, we believe it is important that the men and women on the ground be easily and fully identifiable. No impediment should be placed in the path of the citizen in determining the identity of the personnel in their community.

Section 14 of the act provides that a member of the Joint Force "may search any place, vehicle or person within a Zone without a warrant upon reasonable suspicious that an offence is in the course of being committed or has been committed or is about to be committed".

A clear criticism, to our mind, of this section is the proviso that a constable, in the course of searching and seizing, shall not seize any tool of a lawful trade or business.

What nonsense is this? A taxi driver's car, reasonably suspected to be the getaway car used at a crime scene, or a farmer's machete, reasonably suspected to have just been used to behead his common-law wife, may not be seized? If the proposal is to lift the requirement for a warrant in certain instances, it makes no sense drawing the line where proposed. This caveat should be removed altogether.

There are some further important sections of the proposed act that merit discussion. The provisions relating to arrest and detention, the use of body cameras while operating in the zones, and the establishment of a "Social Intervention Committee" (a feature with which we are absolutely enamoured) come readily to mind.

Space constraints, however, prohibit us from exploring this topic further today.

Nevertheless, do look out for the next instalment of this column - which is published bi-weekly - at which time we will complete our review of the Zones of Special Operations Act.