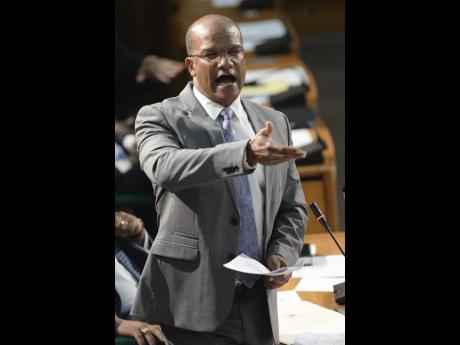 The National security ministry's procurement policy to acquire 250 used motor vehicles for the Jamaica Constabulary Force has met strong challenge from Opposition Spokesperson on National Security Peter Bunting, who described the process as flawed and corrupt.

Bunting pressed National Security Minister Robert Montague in the House of Representatives on Wednesday for answers on the reason for the ministry going ahead with a deal that did not correspond with the specific outline of the type of vehicles required.

He stressed that mileage specification should have been one of the criteria used to determine whether to seal the deal.

Bunting also pointed out that the cost finalised for the vehicles was not what was put forward initially.

... Bidding process was not my responsibility - Montague

Opposition spokesman on National Security Peter Bunting questioned the decision of the national security ministry to purchase motor cars with continuous variable transmission (CVT), which, he said, was not part of the plan.

"One of those mandatory provisions is that there must be no CVTs. Under the specification for transmission, it says no CVTs. Yet, the winning tender for patrol cars was for 2012 Toyota Axios. Since 2006, every Toyota Axio is manufactured with continuously variable transmission," highlighted Bunting in Parliament on Wednesday.

Robert Montague, national security minister, was swift in defence of accusations from the opposition, outlining that the bidding process determined the final cost of the vehicles bought for the police force and that the National Contracts Commission was responsible for managing the process.

He insisted that he was not responsible for selecting the final bidder.

"As much as I would want, I do not possess the power nor the authority to determine the price that the supplier enters the procurement with. It would be my desire that we could get even six cars for the price of one, but when you have a competitive bid, I cannot dictate to the suppliers who qualify and enter the bidding process. If I could do that, it would defeat the whole process of competitive bidding," Montague stated.

He explained that he would discuss the CVT issue at a later date as he needed time to properly respond.