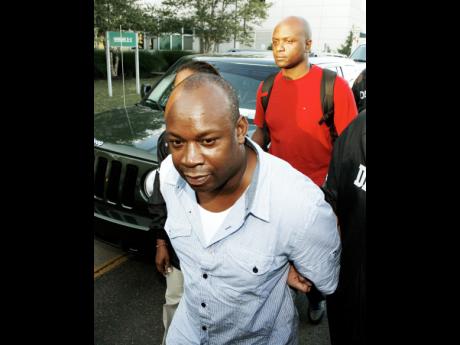 DAVID KARP
Christopher 'Dudus' Coke being taken away by Federal agents in the United States.

The United States (US) Bureau of Prisons has confirmed that Jamaican drug lord Christopher Dudus Coke was transferred to a low-security prison in the state of New Jersey on March 7 to complete his 23-year prison sentence.

However, the Bureau has declined to disclose the reasons for the transfer, citing safety, security and privacy concerns.

It says for privacy reasons it does not discuss whether an inmate is or has been the subject of allegations, investigations, or sanctions for misconduct in prison.

The Gleaner first reported earlier this month that the reputed leader of the Shower Posse had been moved to the Fort Dix Federal Correctional Institution, in the state of New Jersey where inmates are held in rooms with no locks or bars.

This is the third transfer for Coke since 2011 when he pleaded guilty to drugs and firearm charges in a New York federal court.

Responding to questions from the Gleaner/Power106 news centre, the US Bureau of Prisons says generally it seeks to house inmates in the least restrictive environment possible based on a number of factors