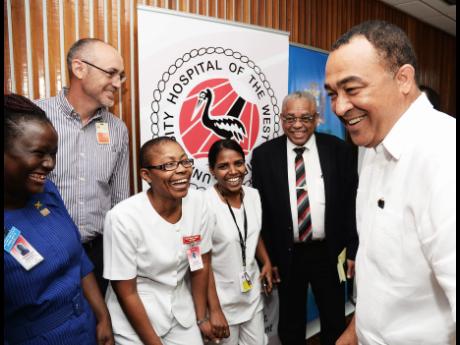 Pleased that his country is being considered a viable destination for specialist nurses to fill the gap in the local health sector, India's High Commissioner to Jamaica Shri Sevala Naik says he is ready to offer any assistance the country might need.

"Indian nurses are highly qualified and language is no barrier, and they are hard-working and they are committed to the work," Naik told The Sunday Gleaner.

The local health sector has been affected by a severe shortage of specialist nurses due in part to the continued recruitment of these nurses by more developed countries.

Unable to match the remuneration packages offered by these countries, the health ministry has indicated an intention to source specialist nurses from countries such as Cuba and India.

The University Hospital of the West Indies (UHWI) was forced to cancel major surgeries earlier this year due to the shortage of specialist nurses.

Since then, chairman of the hospital's board, James Moss-Solomon, has reported that 20 specialist nurses have been recruited from Cuba and have started working, while efforts to get nurses from India is an ongoing process.

Approximately 130 specialist nurses are being sought from both countries combined.

"We are interviewing people left, right and centre by Skype," said Moss-Solomon, who noted that a member of staff also went to India to recruit nurses.

"I am asking for intensive care nurses, I am asking for operating theatre nurses and accident and emergency specialists. I am looking for the ones that people are stealing from us," added Moss-Solomon.

He said the interviews have been going "pretty good", but believes it could be a while before any of those shortlisted can actually start working in the country.

"We have to interview, we have to get the qualifications, they have to be certified and approved by the Nursing Counsel of Jamaica, at which point we are then able to offer them employment and get a work permit," said Moss-Solomon.

According to Moss-Solomon, the UHWI has always had Indian nurses and he does not foresee any challenges once those being recruited start working.

"They are very good nurses, we have had no complaints with either Cuban nurses or Indian nurses."

Naik is also confident there will be no challenges once the Indian nurses come to the island.

He argued that Jamaica could also benefit from recruiting information technology and other professionals from India.