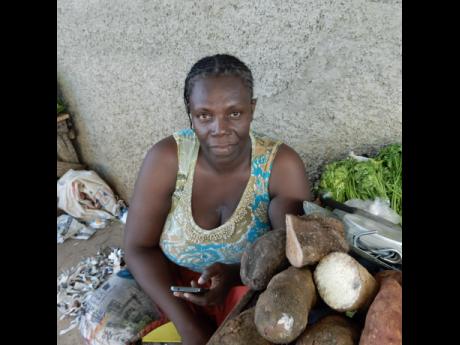 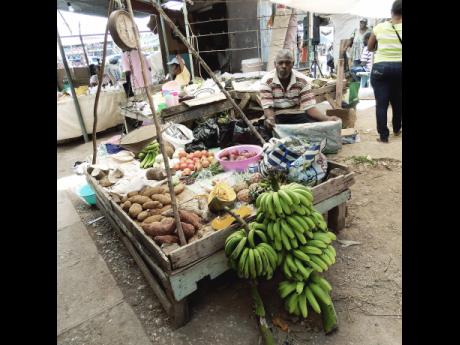 It is a busy Saturday morning and the traffic flow into the Old Harbour Market, St Catherine, is at a steady pace. It was mostly women, market bags and shopping lists in hand who are walking from stall to stall perusing the various ground provisions, sometimes stopping to ask the price.

Many, unable to mask their expressions, let slip a frown of disapproval at the price which doesn't seem to be the one they have in mind. They move on.

From The Gleaner's prime position at the stall of Paulette Tulloch, the raised voice drifted to our ears as one woman, who is not so controlled, she blurted out, "So a wha meck your price haffi so expensive. We nah wuck nuh money, enuh!"

The woman seller didn't take kindly to it and she countered, "A buy mi haffi buy it, tuh, enuh and mi nah meck nutten more dan $10 offa it!"

Tulloch, who sells "this and that", which comprises carrots, oranges, pumpkin, green bananas, sweet potatoes, among other produce, said that's the only way she can guarantee sales.

"I cannot invest in one product and sell. If the person don't want one, they will buy the other," she said, explaining her, strategy for ensuring she goes home with something.

Still, it is not the ideal situation for her, as the profit margin is meagre and her expenses are high.

"You have to pay transport to and from Coronation Market (in Kingston), and when I buy food produce at $80 per pound and resell at $100, it's not much," she said.

Fortunately for Tulloch, she already has a head start on Fridays and Saturdays, as a lot of her customers are 'loyalists'. When they enter the market they head straight for her stall.

Winston Watson, who sells across from her stall, makes the weekly trek from Trelawny to the market and his total transportation cost is $6,200.

Although he farms the two main products he sells - yam and banana - he invests in other produce as well to resell.

"It's a hand-to-mouth thing, but it's better than selling to RADA (Rural Agricultural Development Authority) cause what they want to pay for my goods is cheaper dan what higgler pay," he told the news team.

For Watson, it's hard knowing that he must sell enough to cover his transportation cost before he can even think about breaking even.

"It's rough, but what to do," he said in resignation.

Thankful they are selling without fear of harassment

Both Paulette Tulloch and Winston Watson argue that they would feel a lot better selling in the Old Harbour Market if they had better conditions.

For Tulloch, she dreams of the day when the bathroom facilities can compete with that at Coronation Market.

"Coronation Market 150 per cent better than this. In here always smell renk and it caan measure up," she complained.

A male customer, one of Tulloch's loyal patrons, joined in the discussion.

"Look at the pop-dung stalls, a time fi dem gi di sellers better facilities," he said in defence of the vendors.

Tulloch, who agreed wholeheartedly, said that they have to pay a yearly market licence of $2,500 as well, as a daily fee of $150-$200. She suggested that more can be done to make their working conditions much better.

However, it's not all gloom and doom in their cramped space, as Tulloch and Watson are still thankful that they can sell their produce without the fear of harassment or having their goods stolen.

And even though they are all competing for the dollar, there is camaraderie between them as they joked around and even encouraged consumer to 'buy over there' if they don't have what buyers are looking for. "We are like a family in here and we look out fi each other," said Tulloch.