Sabotage! - Days of illegal fires for profit are over, warns NSWMA head 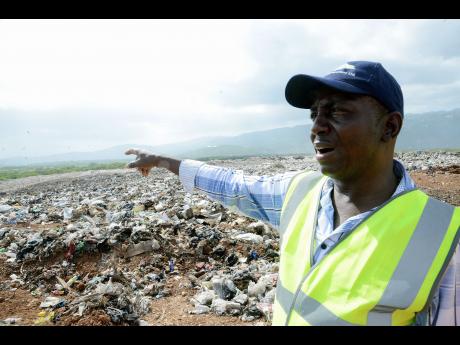 Norman Grindley
Audley Gordon National Solid Waste Management Authority executive director, points to a section of the Riverton landfill after a fire that was put out on the dump.

Audley Gordon, executive director of the National Solid Waste Management Authority (NSWMA), is describing the most recent blaze at the 140 acre Riverton City landfill on the weekend, as an act of sabotage.

He said that evidence suggests arsonists routinely light the dump in order to get the NSWMA to employ them to put out the fire.

"We don't think that this is coincidence. While we expect from time to time to have spontaneous ignition, based on how this one happened and the timing of it, and in all of the other instances. This resembles sabotage," Gordon said.

Approximately $15 million was spent by the NSWMA to battle illegal fires at five landfills across the country over the past two months including fires at the Retirement dump in St James, Myersville, St Elizabeth, Hadden, Montague, St Ann, Doctors Wood, Buff Bay, Portland and at the Riverton City dump in St Andrew.

I used the word sabotage strongly because we are trying to do some things differently. We are trying to professionalise the organisation; we are trying to be more frugal in our spending and to cut out some of the leakages based on our historical evidences," Gordon said, while speaking to reporters Sunday at the Riverton City dump.

"What we are seeing now is that obviously people are upset (with the changes). It is alleged that historically some people benefit from fires at the landfills. Whenever there is a fire people benefit; some get all sorts of projects to do haulage, to supply earth and marl. Let me put in on the record, those days are over," Gordon warned.

He said that no effort will be spared to get all stake holding Government agency, the police and the army on board with the new way forward, in securing landfills and that he has already held talks with the Prime Minister about the matter.

"We are extremely concerned that unscrupulous persons, whether coordinated, on their own, or not, could be sabotaging our efforts at the NSWMA. These fires are very costly on the taxpayers, plus, they compromise air quality and thereby threaten the health of our people," said Gordon.