Briefing | More than 60% of the urban population live in slums 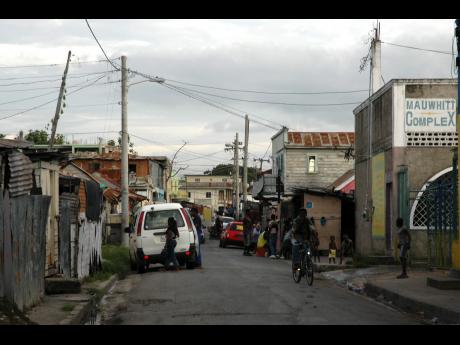 File
This file photo shows a section of Railway Lane in Montego Bay. Residents there had been given 30 days in November 2005 to vacate 29 properties that were to be declared as slums.

The modern world has made major advances in science, medicine and information and communications technology which has increased our understanding of our existence. Notwithstanding this, the world has been plagued by increasing geo-economic and geo-political risks, increasing income inequality in some countries, increasing crime and violence, and climate change. Throughout this time, cities (urban areas) have been the core platform designed to accommodate a country's expansion and inclusion in the global world of business and commerce. Cities, therefore, must be managed properly if a country wishes to become prosperous. The United World Cities Report outlines that currently, more than 54 per cent of the world's population live in cities, gradually increasing to 66 per cent over the next 35 years. Many countries have not figured out how to employ their cities effectively, and there is a staunch imbalance between the resources provided to the households as opposed to those made available to businesses in many countries.

How does an economy coordinate resources?

Fundamentally, in any economy, there are three main agents - the firm, the government and the household, who subconsciously coordinate activities between each other, which, if done optimally, should maintain economic stability and increase economic output so that the economy can gradually develop over time. Efficient functioning of this coordinated process, however, has not been easy to maintain consistently, given local and global geo political and geo-economic occurrences along with the economic bias of many developing countries who provide resources and accommodation for the government and the firm, but less for the household.

What is normally the focus?

The focus of many developing countries is mainly to improve infrastructure for trade and commerce, where companies can increase profits with less focus on ways to increase the wealth of these nations inclusively, and neglects the housing and social services needs of the bulk of the people. These are usually comfortably provided at a premium price, way above the average income or earning potential of the citizens. As a matter of fact, few countries have managed to make the transition from developing to developed. Even so, there should be an attempt to reduce antagonism in the coordinated process between the government, the household and the firm, which is more likely to occur if majority of the people lived in comfortable settings and are less relegated to slums.

What percentage of the urban population live in slums?

How has the Jamaican economy evolved?

Jamaica has withstood two financial crises; one which was domestic in 1997 and the global financial crisis of 2008. These, along with other local shocks, for example, drought sometimes or heavy rain, and external shocks, for example, hurricanes, have proved the countries resilience. However, a surge of crime and violence has been difficult to contain by the Government due to many factors, including the police inability to properly manoeuvre unplanned housing villages, erected and expanded across the cities as a result of an uneven distribution of income.

What is the world doing?

The United Nations has the same 2030 Sustainable Development Goals (SDG's) laid out for all countries with a strong focus on improving the lives of underprivileged living in cities. The UN's Conference on Housing and Sustainable Urban Development, known as Habitat III, is expected to set the foundation for a new urban plan. It should help countries to improve their city's contribution to global development by gradually increasing the safety, inclusiveness, resilience and sustainability of these cities. As explained by the UN Habitat executive director, Habitat III should ignite the urgency to address these global issues that cannot wait on political schedules or opportunistic moments, but should be laid out in a clearly defined plan of action.