Shortchanging our children - Understaffed OCA struggling to fulfil its mandate 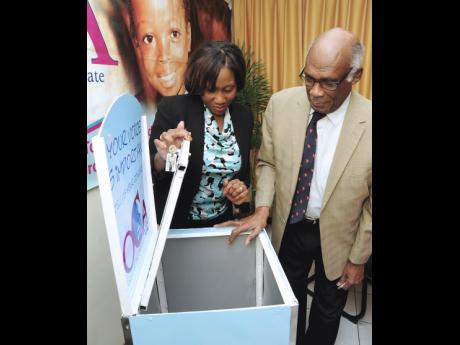 Ricardo Makyn
In the 2013 file photo, Diahann Gordon Harrison (left), Childrens Advocate, and her deputy Justice Henderson Downer, open the lid to a box that was to be used by wards of the State to deliver their opinions and remarks in a confidential manner.

More than 70,000 children in Jamaica were reported abused between 2007 and 2015 and the rights of hundreds more have been violated since then, but the Office of the Children's Advocate (OCA) has been hard-pressed to investigate many of these cases.

Severely understaffed, the OCA, which is mandated to protect and enforce the rights of children while promoting their well-being, is struggling to manage what is a burgeoning caseload.

With four attorneys, six investigators, and no psychologists, the OCA has found itself facing a dilemma and Deputy Children's Advocate Justice Henderson Downer said the office is only able to touch the tip of the iceberg in relation to the cases that come before it.

"We cannot undertake many of the instances that come before us, so what we do is that we try and deploy the four lawyers that we have to accompany the children to court because, especially when we investigate the cases ourselves, they need someone there if we are not prosecuting to hold their hands," said Henderson during a recent workshop aimed at forging a national plan of action to respond to violence against children.

Also needed is a psychologist who can help to provide counselling to the children the OCA tries to represent and assist.

"From the very beginning in 2006, when the Office of the Children's Advocate was set up, we have been asking for a psychologist," said Downer.

Given the demand currently placed on the Child Guidance Clinic, Children's Advocate Diahann Gordon Harrison believes it is sometimes not a practical solution, given the fact that a child might need urgent intervention before they appear in court.

"Without a psychologist on staff, it really compounds our problem and so from time to time, what we have had to do is do our own in-house counselling for what that is worth," Gordon Harrison told The Sunday Gleaner.

"Our view is that if we are a child specialist entity that deals with children who are invariably psychologically impacted, having a psychologist on staff is something that will certainly enhance the ability of our office to impact these children in a positive way," added Gordon Harrison.

Given the number of cases coming forward for further investigation, Gordon Harrison finds the workload for investigators untenable.

"I think they were rationing anywhere from 150 files to about 180 per person within any given four-week period. It is an extremely heavy caseload that requires more boots on the ground to be more effective," she said.

Another matter that concerns Gordon Harrison is the fact that the agency does not have a fully staffed public-education unit. Currently, the unit has only one person, although the OCA is mandated to educate children about their rights and the role of the Children's Advocate.

She said that the OCA is unable to hire more attorneys without the approval of the Ministry of Finance, and as such, it is trying to get approval to advertise for more.

"Of course, we will very much continue to urge them in a very fervent way, as we have been doing, that we do need more and we do need them to approve us as an establishment that needs more, so we can advertise and hire," said Gordon Harrison.

Functions of the OCA

- Provide legal representation for children who need it. These children can be referred by the court or may come to the attention of the OCA by other means.

- Institute non-criminal court proceedings before a court or tribunal on behalf of a child.

- Intervene in any legal proceedings (including criminal) before a court or tribunal which concerns the rights or best interests of children.

- Consult with children and their caregivers about the role and functions of the OCA and about current issues that may affect them.

- Keep under review the adequacy and effectiveness of law, practice, and policies relating to the rights and best interests of children.

- Provide assistance (including financial assistance) to children who need to make a complaint against a relevant authority that has infringed on their rights and/or adversely affected their best interests.

- Maintain proper records of complaints received while dealing in a confidential manner with the personal details of the children mentioned in any issue. The privacy of all children is respected.

- To investigate ANY allegation that a child's rights and/or best interests have been negatively impacted or breached. The extent of this authority includes even government entities and/or their agents and representatives.

- Initiate investigations once the advocate determines that it is necessary so to do.

- Inspect institutions in which children are accommodated to ensure that minimum standards are maintained.

- Educate the public, especially children, about the role and functions of the OCA and how they may communicate with the OCA.

- Give advice and make recommendations to Parliament, ministers of government, or any relevant authority on any matter concerning the rights and best interests of children.