Jury-removing proposal to be withdrawn 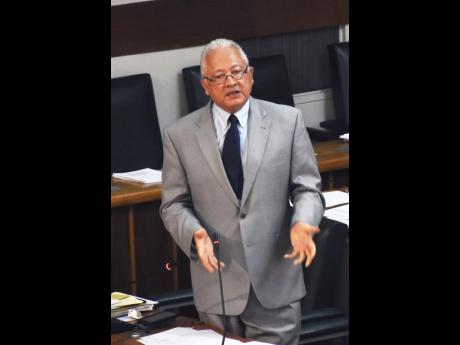 A proposal brought to Parliament that would make gun-murder cases tried only by judges is to be withdrawn when legislators meet in September, amid resistance from defence lawyers and accusations of lack of consultation by the Opposition.

Justice Minister Delroy Chuck told The Gleaner that he will be withdrawing the amendment proposed for Section 6 of the Gun Court Act when the House of Representatives resumes sittings in September following its summer break.

"I think a significant failure was not consulting more widely before it had been proposed for its implementation."

At the last sitting on July 26, Chuck tabled the amendment along with others that, he argued, are needed to reduce the backlog of cases in the court system, which he said "is a real, real problem".

It got little attention from Opposition members; and one government legislator, who exp-ressed unease about it, refused to speak out, saying that the fight should be left to the Senate.

The amendment did not get approval, as the committee stage of deliberations was suspended because of concerns from the Speaker and Opposition that the full list of changes to the Criminal Justice (Administration) and the Indictment laws were not circulated before, breaching the rules of the House.

Opposition Spokesman on Justice Mark Golding expressed alarm at the move to remove the option of trial by jury in gun-murder non-capital matters, arguing there was no consultation.

"The amendments were brought to Parliament on Tuesday (July 26) without prior consultation with the legal profession, the judiciary, the Opposition or the wider public."

"It is quite extraordinary," Golding said, "that the Government is seeking, without any stakeholder consultation whatsoever, to take away the longstanding right to a trial by jury in relation to the majority of murder cases in Jamaica."

Other senior lawyers, including Bert Samuels, have criticised the proposal. In a piece he wrote in The Gleaner last week, Samuels said "the time-honoured and sacred principle - that serious offences attracting severe punishment must be 'tried' by our peers acting as jurors, under the guidance of a trained high court judge - is now under siege".

Human-rights lobby Jamaicans for Justice has also questioned the decision, saying though a jury trial is not constitu-tionally guaranteed here, it exists at common law and is a protection against injustice.