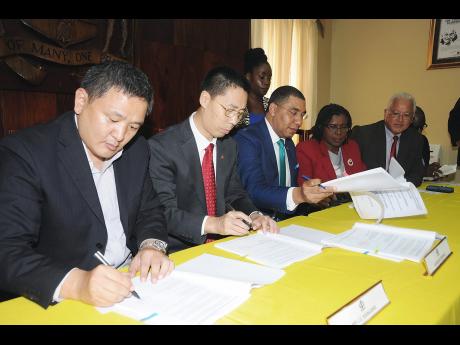 Prime Minister Andrew Holness on Wednesday publicly addressed concerns about the recent wave of investments by Chinese nationals, some of whom have been accused of unseating locals, en route to dominating and controlling the commercial pulse of many town capitals across the Jamaica, insisting that in the long-term Jamaica and Jamaicans would be the real beneficiaries.

"Recently, I have been quietly observing certain commentary being made in the public domain about the increased investment activity in Jamaica by our partners the Chinese Government," he said at the contract signing ceremony for the Barbican Road upgrading works in St Andrew.

"Jamaica has never been a xenophobic country. We've always been embracing, very open to other countries. It is understandable however, given our current economic state that there are fears, especially when it comes to jobs and the high competition for jobs, for businesses. When we see where businesses that were formerly owned by locals are being bought out.

One of those realities, he explained, is that with China, now probably the world's largest provider of foreign direct investments across the globe, it would be foolhardy to ignore them.

Holness continued, "and that means that you have to be receptive to investments, not just from China, but Jamaica wants to see a diversified portfolio of investors coming into this country. We want investors from all over to come here and invest. We want people to choose Jamaica to invest, we want people to choose to make their homes in Jamaica and so the Government of Jamaica has, not just with my government but with the previous government and the government that I was a part of before that, developed a strategic relationship and partnership with the Government of China."

Jamaica continues to benefit from partnership with the Chinese, as evidenced by number of major infrastructural investments, and stands to gain much more, Prime Minister Andrew Holness pointed out, even as he appealed for understanding of the process.

"We won't do to leave any Jamaican behind. We will make sure that the prosperity is shared for all. I want to reassure Jamaicans that the fears that are being expressed, that we must take a very progressive view towards engaging foreign investment in our country."