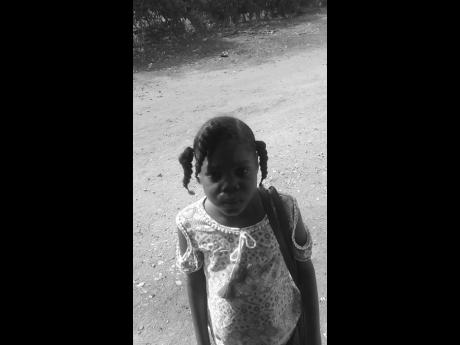 Her small frame is by no means reflective of her age, but rather of an ongoing battle with hypertension, diabetes, high cholesterol, and kidneys that may soon fall into complications.

Sorina Johnson is not your average 14-year-old girl. Her illnesses have robbed her of a true childhood experience and is about to rob her of a life as an active teen.

The hospital has become a second home for her, and she is slowly losing hope.

According to Sorina's mother, Natasha Facey, her daughter has been in and out of school so much that they have decided to withdraw her from school completely.

"She was diagnosed with diabetes when she was three years old, but it was since this year that she was diagnosed with high blood pressure and high cholesterol. Every day she gets sick at school and the teachers or the vice-principal have to carry her home or to the hospital. We decided it wouldn't make sense to have her go back."

Facey, who operates a small grocery shop, said she is able to come up with enough to offset expenses associated with some of the medication, but finds it hard to pay for the tests that must be privately done.

"There are times when they admit her and take samples from her, then give it to us to take somewhere for testing. She is admitted often. Last time, it was July, and now she's back in. When she would normally be put on the paediatric ward, she would spend up to a one month in hospital, but now is for a week or two weeks," said Facey.

She added that the whole ordeal has made her daughter angry and depressed.

"I can see that she is depressed and she has this anger problem. Sometimes I hear her telling God to take away her sugar from her," Facey revealed as her voice fell.

She continued: "The doctors are now telling me that her kidneys are losing protein, and though she not in need of dialysis, I don't know when it will reach that stage."

Facey says she is mostly alone when it comes on to fully caring for her daughter.

"It is very hard and stressing. More time, it coming like mi a guh have nervous breakdown and outside of her grandmother, it's me who has to do the up and down."

Facey told Rural Xpress that she really wants for her daughter to live as normal a life as is possible.