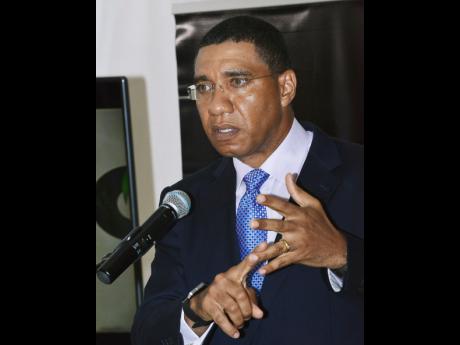 Policymakers are still tinkering with regulations to outline the process of mandatory evacuation of persons living in areas considered danger zones more than two years after Parliament passed the Disaster Risk Management Act in February 2015.

Prime Minister Andrew Holness on Thursday addressed the issue at his quarterly press conference at Jamaica House against the background of widespread devastation of some islands of the Caribbean and Jamaica's vulnerability to similar natural disasters.

He said it was the policy of the Government to implement the mandatory removal of persons who live in areas susceptible to natural disasters.

According to him, new building codes and development orders have been tabled, but there are discussions among some interest groups who have raised concerns over aspects of both documents.

Local Government Minister Desmond McKenzie had vowed that regulations giving the authorities power to sanction people who violate mandatory evacuation orders would be implemented by the end of 2016.

Almost a year later, and with the destruction of several Caribbean territories by hurricanes Irma and Maria, the regulations are no closer to being tabled.

With no further development on the issue and the region facing the wrath of mid- to late-season hurricanes, many Jamaicans are still living in areas prone to risks from storm surges and which cause flooding.

Several have suffered damage before, but have returned to life in the danger zones.

McKenzie said the review is being done to strengthen the provisions and making the legislation more effective, particularly in relation to compulsory evacuations from areas deemed vulnerable to severe weather, such as hurricanes and tropical storms.

On Friday, Senate President Tom Tavares-Finson warned Jamaicans "to take sleep and mark death", telling them that they should not believe what has happened in the rest of the region cannot happen here.