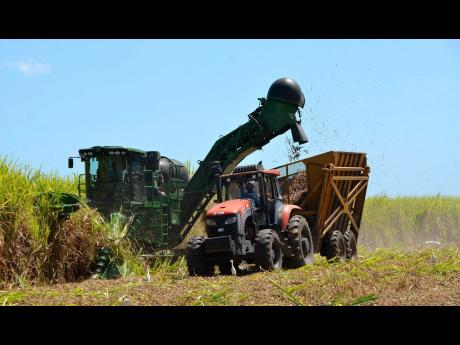 George Hong Guo, deputy CEO of Pan Caribbean Sugar Company (PCSC), is forecasting several more years of losses at Monymusk, but believes there could be gradual improvement if the Government stands by its commitment to supply the raw material for production.

The Chinese are once again at the helm of the operations at the Clarendon-based facility, after opting out for 2016, but have surrendered the cultivation aspect to the Government, who has guaranteed supply of a minimum of 150,000 tonnes of cane for the 2017/2018 crop year, even as the hunt continues for a new investor or joint partner.

"We have pointed out to the Government that we will require the minimum 150,000 tonnes of cane for the crop, and that means that we will still have millions of dollars of losses for the operation," Hong Guo, told The Gleaner in an exclusive interview recently. "... but we hope the cane farmers can have a better cane-production cultivation, so the cane supply for Monymusk year by year will step up from 150,000 until we can gradually break even or dare imagine making a profit."

"To be frank, 150,000 tonnes is ridiculous because 150,000 tonnes means a deficit of US$2 million, but if we get 200,000, our deficit would be far less...to about $1.5 million," argues Hong Guo, who speaks fluent English and is familiar with western traditions. "With more cane, that could decrease overtime to a point we could even dare to dream of breaking even."

According to Hong Guo, who was operations manager for the two crops prior to its decision to sitting out 2016; the feasibility study that was done during discussions with the Aubyn Hill led negiation team in 2010 revealed that 400,000 tonnes of cane would make Monymusk break even.

"The new deal is that we are going to run the factory, but the key point is getting the required supplies in cane, and that could be very difficult," he added. "But if the cane farmers fail to meet our requirements, we will probably have to once again tell Government that this is too big a hole."

The Government had to enter a short-term management agreement to run the sugar factory for 2016/2017 in order to save the livelihoods of hundreds of cane farmers along the Vere Plains, after the Liu Chauyo-led firm decided to focus on their Frome facility, following more than US$60 million in losses.

Earlier this year, the Chinese firm asked the Government to continue operating the factory for the new crop, but Karl Samuda, minister of industry, commerce, agriculture and fisheries, instead, convinced the owners to resume operations under certain conditions,

"It is a difficult period for Pan Caribbean, specifically because of the problems to operate the estate farms effectively, not because we are Chinese or any lack of knowledge or understanding of cane cultivation, it is mainly the difficulty of how to manage the locals to get higher productivity and lower leakage," said Hong Guo. "Our parent company, Complant, is very experienced in the management of sugar estate in African countries, but here in Jamaica, we have met with many challenges."

One of the biggest contributor to the high operation at Monymusk is the more than US$5 million paid the Jamaica Public Service annually, while other issues such as the high cost of harvesting cane and theft of herbicides, fertiliser and petroleum have made a huge dent in the Pan Caribbean's confidence.

"We found some of the cases of theft, but it is very difficult for the Chinese man to deal with these kinds of things ... they (locals) are very clever," he stated. "It is not Pan Caribbean's initial intention to run monymusk again because we cannot deal with the issues - very high cost, poor cash flow, and a lot of losses."

"I can tell you, our Chinese consideration is mainly political, the only reason we are back is because Pan Caribbean is a state-owned company. Had it been a private operation, we would be gone. But we consider the good relationship of the two countries, and we understand that if the factory does not open up, it will be a tough situation for the Government, and especially local families."

Pressed on the future of Pan Caribbean in Jamaica over the next five years, he said, "Even if we get a new investor, I think Pan Caribbean will still be here, especially Frome, but for Monymusk, it is hard to say ... it depends on the guarantees of cane supplies - and leakages have to stop."