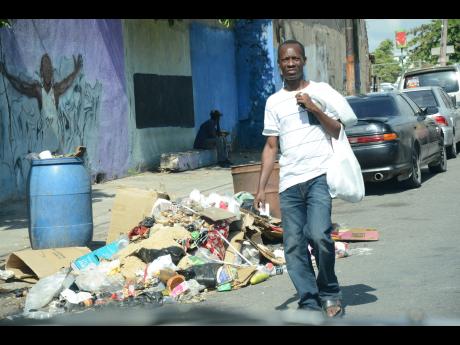 Rudolph Brown
Garbage pile up on West Street in downtown Kingston last Wednesday despite nightly clean-up by the NSWMA during the Christmas period.

Faced with a barrage of criticism over its garbage collection over the past year, executive director of the National Solid Waste Management Authority (NSWMA), Audley Gordon, says many of the critics are being unfair to the agency he was appointed to lead just over one year ago.

According to Gordon, despite a shortage of trucks and other equipment, the NSWMA is doing its best in a country where the proper disposal of garbage is not a priority.

"Garbage collection is a process. We just keep doing things and behaving in ways without understanding that what we are doing is adding garbage to the society; we just live. With that said, you will always be seeing garbage, because there are some areas where we have to clean the skip twice a day," added Gordon.

He said the NSWMA tries to stick to a schedule of collecting garbage in each area at least once weekly, and a build-up of garbage does not reflect dereliction of duty on the part of the agency in most cases.

"Nobody wants to see garbage around, and we understand that, but we are working very hard where we can get to the place where people don't have to contend with that excess garbage.

"The residents can help us by ensuring that they properly containerise their garbage," said Gordon, as he added that more money needs to be pumped into dealing with solid waste management locally.

"We have to tie solid waste to the health of the nation in a more meaningful and tangible way, and that means how we allocate resources to solid waste management," said Gordon.

"We are talking about a situation where we fund public cleansing upfront in a way that will see us mitigating significantly, if not eliminating, all the breakout of diseases that usually come from mosquitoes and other garbage-related issues.

"When there is a case of chik-V or ZikV monies are found and good reactive measures are taken. The conversation I am trying to build out now is for a more proactive approach, which will see us spending more resources on the front end to ensure that not only do we have the hardware which includes the trucks and equipment, but we have a proper public education campaign that see a sustaining of the messaging in a way that it will ring home to people," added Gordon.

While agreeing on the need to properly fund the country's waste-disposal system, deputy CEO of the Jamaica Environment Trust (JET), Suzanne Stanley, is not convinced that the NSWMA is doing the best with what it has

According to Stanley, solid waste management in Jamaica has been in critical need of attention for too many years, and if action is not taken urgently there could be a seriously negative impact on every sector of the society.

"Jamaica has long been struggling with an ineffective solid waste management arrangement; it is a very poorly resourced area of our administration and the organisation itself has suffered from a lot of institutional failures over the years," said Stanley, who is set to take over as the head of JET tomorrow.

"I do believe it is high time that improving the solid waste management system in Jamaica is made a priority, as the longer we leave it the more costly it is going to be to fix.

"We receive daily complaints about garbage not being collected in communities, and more often than not when we investigate it is not a case where the garbage was picked up last week; it is an ongoing problem where garbage has not been collected in weeks, months," added Stanley.