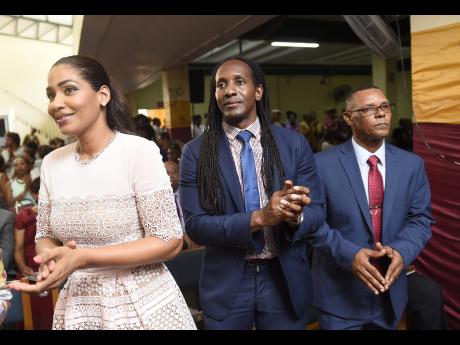 Gladstone Taylor
The funeral of Dr Janice Lindsay pulled a large group of persons who paid tribute to her, including (from left) Lisa Hanna, former minister of culture; Alando Terrelonge, state minister in the Ministry of Culture, Gender Affairs, Entertainment and Sports; and Pastor Wentworth Mitchell.

Hailed as a true professional whose legacy stands as tall as the Blue Mountain, which she helped to establish as a World Heritage Site, Dr Janice Lindsay was lionised during her funeral at the Portmore New Testament Church of God yesterday.

Family and personal friends, politicians and professional colleagues and strangers whose lives she had touched reflected on a life filled with smiles, encouragement and humility.

"Had she been here, she would probably lean over, touch me on my shoulder and whisper in my ear, in that sweet Patois rhythm she would sometimes use, asking, 'Rhomes, you OK? You know you nuh have to do this right?' and she would break into that sunny smile that was a signature part of her personality," said friend Rhoma Tomlinson-White, during a tearful remembrance of Lindsay.

"Jan was an outstanding professional. She had accomplished so much. But Jan wasn't just the consummate professional, she wasn't just a boss who tried to get the best out of her team ... more important, Jan was a loving, kind, energetic human being.

"She loved to laugh, she loved life and she enjoyed people," said Tomlinson-White, who had been friends with Lindsay for more than two decades and was one of the last persons to speak to her alive.

Lindsay, who at the time of her passing was the principal director of culture and creative industries in the policy division of the Ministry of Culture, Gender, Entertainment and Sports, died at the University Hospital of the West Indies on July 6, after a brief illness.

tribute, said Lindsay had a wealth of knowledge about culture and the creative industries, while Opposition Spokesperson Lisa Hanna, who once headed the culture ministry, described Lindsay as an ever-willing worker, who frequently went above and beyond her duties.

FACE OF THE STUDENTS

Professor Hopeton Dunn, director of the Caribbean School of Media and Communication, said Lindsay was usually the negotiator and face of the students he taught at the school many years ago.

"News of her death was devastating. We are still trying to come to terms with this tragic loss," said Dunn.

Lindsay was a member of a triplet, and her two surviving sisters took some solace from the tributes. One member of the trio, Joan Francis, described the tributes as overwhelming.

"We know that she did a lot of work locally and internationally, but I guess we didn't know how much she was loved and respected. The tributes were just testament to that love," said Francis.

"Jan would want to be remembered as someone who contributed with passion to her country. She was very bright, she was very caring and she loved her family," added Francis.