Safe haven disrupted for some students of Mona Heights Primary 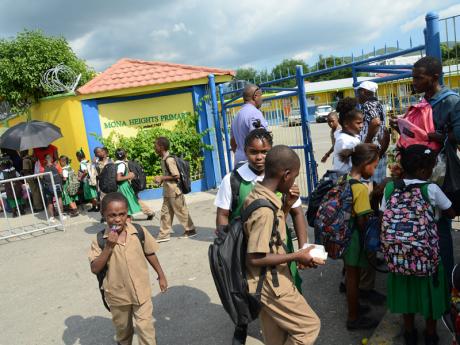 The Mona Heights Primary School was considered a safe haven for many students, especially those from very volatile areas. However, that changed last Friday after a vendor was fatally shot at the school's gate.

In discussing the impact of the incident on the students Monday, the principal, Fabian Mahabeer, said they are in the process of enhancing their security measures, in addition to increasing sensitisation among students.

“A lot of students when they come here, they find solace in the school and, depending on the environment they are coming out of, when they walk through the gate, it’s almost like an oasis. Many of them when school ends, they don’t really want to go home because if you visit some of the communities where they come from, you see why they don’t want to go home. So with this happening, it’s as if the community has now come to the school,” the principal told The Gleaner.

“For the most part, they are shaken up. You would have had students here, who have never heard a gunshot. Some of them are from areas including August Town and though it might be a regular occurrence for them, it was still frightening,” he continued.

In reflecting on the incident, the principal said he was comfortable that every measure would have been exhausted to ensure that there was minimal emotional and physical impact. He also noted that there was great support from neighbouring schools, including Mona High and Jamaica College, in addition to the Ministry of Education and nearby churches.

“All of our staff would have had some training in dealing with trauma. In fact, all our teachers are trained in first aid. So we tried as best as possible to cauterise the situation, especially with the parents, we didn’t want to have them bomb rushing the school,” he said.

“Everybody had a different story. Parents were calling to say they heard that the man was shot in the tuck shop, others said they heard that dem shoot up the school and everybody was passing on the different information. So that was the greatest challenge we had, a lot of misinformation.”

He said, though, that there was minimal absenteeism on Monday.