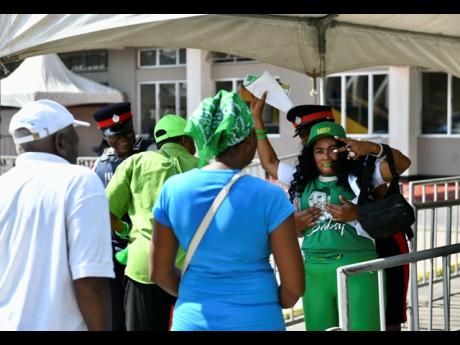 Ricardo Makyn
Police conduct searches to the entrance of the National Arena in Kingston. 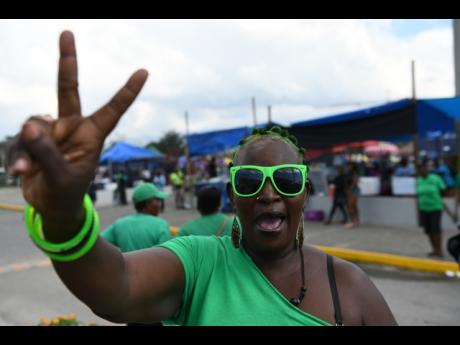 Jubilant, bell-ringing Jamaica Labour Party (JLP) supporters have swarmed the grounds of the National Arena in St Andrew as they set about celebrating the party's 75th anniversary.

The theme for the conference is 'Building a Prosperous Jamaica', and supporters seemed to have latched on to the general idea, some having the word 'prosperity' printed on their party T-shirts.

"Showa! Showa!," throngs of green-glad supporters shouted as they made their way towards the entrance of the arena, some gyrating to the sounds of past JLP election jingles.

"Labour Party nice, it sweet. Far me a travel from and me come out [to] have a nice time and do Labour Party business.

"Me like how the Labourites dem come out fi dem party and it's a good look," Maureen Samuels told The Gleaner as she beamed with excitement.

Another supporter, Kevin Downer, said he had travelled from Westmoreland to listen to Prime Minister Andrew Holness deliver the conference's keynote address.

"A Andrew me come fi listen. This conference [couldn't] miss me - rain or shine," he said at a security check point at the entrance of Independence Park.

There is a heavy security blanket around the National Arena as police officers and private security guards seek to maintain order as the crowd size begin to swell.

Heads of affiliate groups of the party are also down to make presentations.

Party insiders told The Gleaner that the JLP leader and prime minister will highlight the key achievements of his administration of the nearly three years in office, with focus on the economy, national security and infrastructure development.