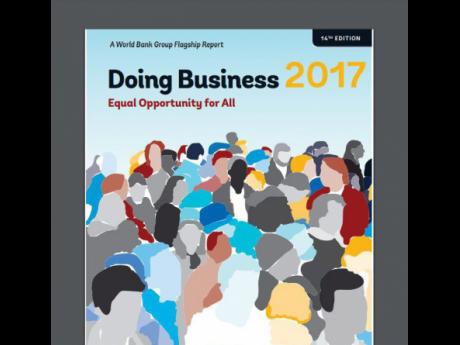 Jamaica's rank has fallen consecutively over the past years, from 65th in 2016 to 67th in 2017, to 70th in 2018, and now to 75th in the 2019 Doing Business Report. The rank has fallen despite Jamaica's index value increasing by 20 basis points, from 67.27 in 2018 to 67.47. This is indicating that some procedures to do business are improving on the island but are not improving rapidly enough to keep up with the rest of the world.

How easy it is to start a business?

It takes 4.9 procedures and 9.3 days to start a business in the Organisation for Economic Cooperation and Development (OECD) countries on average. The cost to start a business has fallen from 4.8 to 4.4 per cent of per capita GDP in Jamaica compared to 37.8 per cent in Latin America and 3.1 per cent in the OECD. Slovenia appears to have replaced the United Kingdom (UK) as the country with the lowest business start-up registration cost.

What about dealing with construction permits?

Jamaica's rank has fallen from 91 in 2018 to 115 in the 2019 report. It requires seven procedures, 95 days and cost approximately 23.9 of income per capita to get electricity in Jamaica relative to just 5.5 procedures, 65.5 days and a cost of 946.3 per cent of income per person in the other Caribbean and Latin American countries, and the requisite 4.5 procedures in 77.2 days to get electricity in the OECD countries.

How easy is it to register property and get credit?

Is it easier to pay taxes?

Jamaica is ranked 123 as it relates to paying taxes, slightly worse than 122 in 2017, although maintaining the same amount of procedures and time as last year, it still requires 11 payment procedures, but now requires 272 hours with a total tax rate on profits of 35.1 per cent relative to 27.1 payments taking 330 hours and a total tax rate of 46.7 per cent on profits in the Caribbean and Latin America.

How well does Jamaica trade across borders?

Jamaica has got worse as it relates to enforcing contracts. Jamaica fell from 122nd place in 2018 to 127th in the 2019 report. It still requires 550 days and costs approximately 50.2 per cent of the total claim, compared to 768.5 days and a cost of 31.4 per cent of the claim in the other Caribbean and Latin American countries.