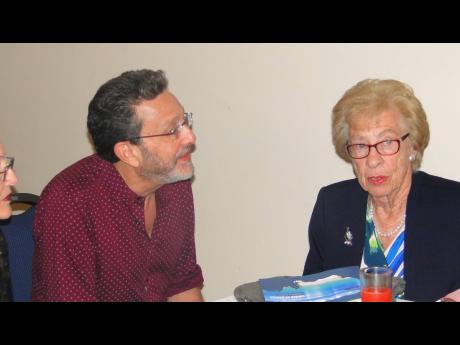 As fate would have it, Eva Schloss, nee Geiringer, was not separated from her mother, Mutti, from the moment they were taken from their hiding place by SS officers in Amsterdam in the Netherlands. She was, however, separated from her father, Erich and brother, Heinz.

Her luck ran out when her mother was eventually selected by the feared Dr Mengele, also known as ‘Dr Death’. It left Eva in a state of unspeakable emotional turmoil and sadness. Yet, she took a big risk by finding Minni, her mother’s cousin, a ‘privileged’ wife of another ‘privileged’ prisoner to tell her what happened. Eva was moved to another labour camp the following day.

In the morning they were marched to a huge shed of tables full of rags and rolls of very hard paper. They were to tear the paper and plait them into 3 by 5 by 20 centimetre ropes. The weak and feeble ones who could not managed the work were beaten or taken away to be gassed.

“There were only a few pair of scissors in the entire shed which we could borrow from one another, but mostly we had only our bare hands to use as tools. I often had to use my teeth,” Eva Schloss writes in her book, 'Eva’s Story'.

The prisoners existed in appalling conditions, including cramped sleeping arrangements. Their bunk beds were infested with thousands of bedbugs that bred in clumps, clinging to their flesh, causing boils and other skin ailments.

In addition to their weekly baths, and the bedbugs, there were vicious body lice, pangs of hunger, and once a black rat attempted to bite her foot. Because of the bug bites and the filthy conditions, she says, a boil developed at the back of her head. It needed lancing, but how? The answer came by way of a Kappo (female guard), who was accustomed to beating Schloss because she could not stand still for long periods.

“This time when she struck out at me her hand landed squarely on my boil. That did the trick! The boil burst open and pus spattered all over her hand and face. I felt great satisfaction in seeing her look of disgust as she wiped it away,” Schloss recollected.

One of the most despicable elements of the suffering was the removal of overflowing buckets of human waste. One morning when a German SS woman officer saw spilt waste on the ground, she flew into a rage, and grabbed Schloss’ precious mug from her hand, dipped it into a nearby bucket of waste, and then threw the mugful on to some of the prisoners.

“Then filth landed all over my skirt and legs, and I knew there was no way of cleaning myself until the end of the week. We were left stinking until the next shower,” Schloss related.

At the end of October 1944, Schloss lost hope. Despair set in. She did not want to live. “And so, suffering the horrors of the present and seeing no hope in the future, I began to resign myself to death,” she writes.

But, her despair was to turn to an abundance of joy when a Kappo brought her to her father who had gone to see her because of his connections. It was a happy moment, to say the least, until he asked her for her mother. She told him she was selected and gassed.

“He reeled backwards as if I had hit him. He tried not to break down in front of me, but his eyes filled with tears and I could see that his world had been destroyed,” Schloss recounted.

However, this visit changed the situation for Schloss, somewhat, as his father was able to arrange for the kitchen to give her some extra scraps of food, and the bullying from the Kappos subsided. Her father went to see her once again at the end of October, with renewed hope and news that the war would soon be over.

Summer gave way to a long, blistering winter. Schloss’ toes got frost bitten, and became gangrenous. She refused to go to the hospital for fear of being selected. That fear was heightened when they were once ready for their weekly bath, and were told their regular showers were not working.

They were marched to alternative showers, but refused to enter them, believing they were going to be gassed. Their reluctance created one big commotion from the Kappos. They were beaten and coerced, but nobody moved, even when reinforcement came. It took a young male German officer to convince them they were in no danger. They only budged when the shower doors were opened, and hot water rained down from the ceiling.

About noon the following day when a new group of women arrived, Schloss recognised some of them from her earlier quarantine. They remembered Schloss, and told her they had good news for her. Her mother was alive, and lying in the hospital. Minni, her ‘privileged’ cousin, had saved her.